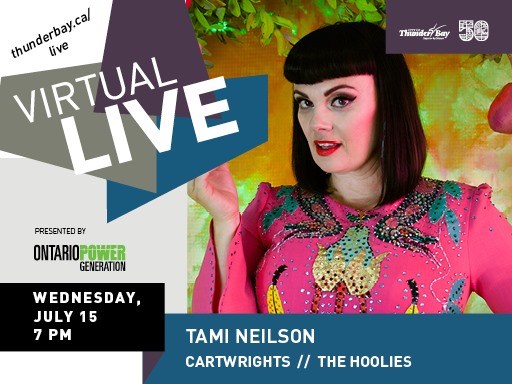 In response to Provincial orders and physical distancing mandates, the City’s Live on the Waterfront series will be delivered virtually this summer. With public safety being top priority, event staff are planning innovative ways of delivering events without encouraging the large gatherings that typically occur with events of this scale.

Virtual Live, presented by Ontario Power Generation, is Thunder Bay’s premier performing arts series, showcasing the best local talent alongside some of North America’s finest artists. The virtual series will run every Wednesday from July 8 to August 26, 2020 at 7pm.

Ragged Road
What do a maintenance manager, math teacher, map-maker, lawyer, and public relations expert have in common? Ragged Road. The band’s music has been described as “a fun blend of rock and folk music with a touch of Celtic Influenced Sound”. After bursting onto Northwestern Ontario’s music scene in December 2018, the band has released an EP album, had music featured on Acadia and Goldenwest Radio networks, have played gigs in Ontario, Manitoba and Saskatchewan, and were finalists in Sunset Country Spotlight.

Cold Lake Sun
Originally a solo project created by UK-born songwriter multi-instrumentalist Robin E. Moss, Cold Lake Sun has evolved into a five piece-Anglo-Canadian-indie-alternative-pop-rock band with a uniquely transatlantic feel. Cold Lake Sun specialize in tightly crafted-upbeat-melodic-happy/sad-guitary-synthy-reverb-drenched songs with a distinctively new wave and dreampop flavour. Since formation in 2014, CLS has become a permanent fixture on the Thunder Bay music scene and has appeared at a number of high profile shows across the Northwest.

Gibson Martin & I
Gibson Martin & I is a Canadian Bluegrass band based in Thunder Bay. The band consists of four players and has been around in one form or another since 1986 and was awarded a “Certificate of Recognition for Musical Achievement” by the Minister of Canadian Heritage in 1995.

* Art projects lead by artists of the Community Arts & Heritage Education Project (CAHEP) will also be featured in between acts! Enjoy a different art activity each week!