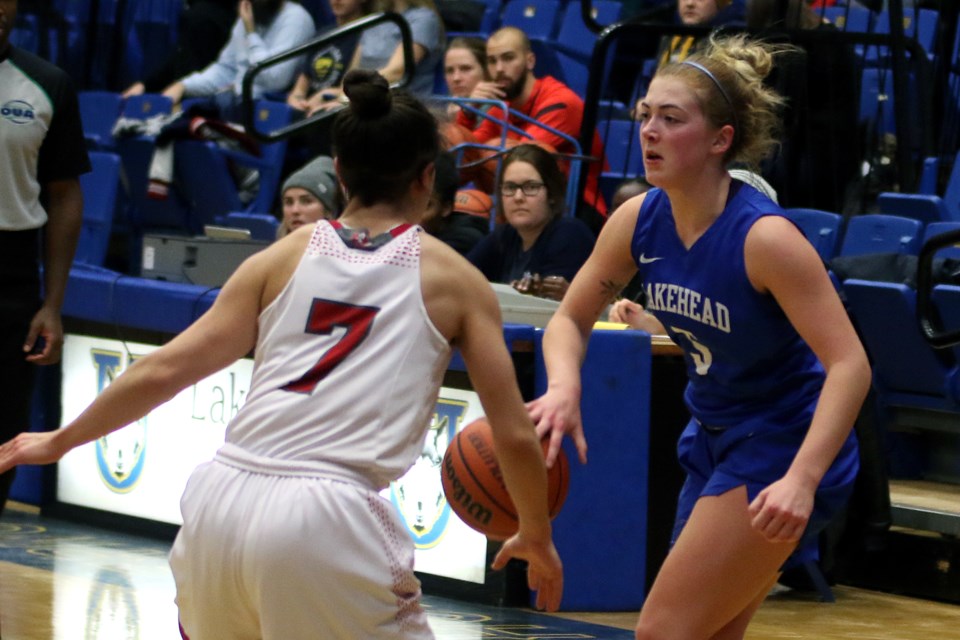 Lakehead's Kielly McDonough had four three-pointers in the opening quarter against Emma Jonas and the York Lions on Saturday, Nov. 30, 2019 at the C.J. Sanders Fieldhouse. (Leith Dunick, tbnewswatch.com)

But they couldn’t keep the momentum going.

They’d only score 28 more points the rest of the way.

The York Lions, on the other hand, made a quick recovery after a slow start and went on to defeat their hosts 82-55 at the C.J. Sanders Fieldhouse, earning a weekend split on the road and a return to .500 at 6-6 as they hit the Christmas break.

In the opening quarter, the Thunderwolves looked all but unstoppable, thanks in part to Thunder Bay’s Kielly McDonough, who scorched the Lions’ defence with a quartet of three-pointers as Lakehead jumped in front 27-19 after one.

The Lions make a quick adjustment in the second, outscored the Wolves 23-6 in the period and built a nine-point lead at halftime that kept growing and growing in the second half.

The strong start makes the loss that much harder to swallow, said Kreiner, whose team finished first-half play at a disappointing 2-10.

Basketball is a game of runs, and the Thunderwolves, to their misfortune, were at the wrong end of too many of them in Saturday’s rematch.

“We went on a 15-0 run and then they went on an 18-2 run and those swings happened really, really fast,” Kreiner said. “We weren’t able to stem the tide.”

The Lions run, coming on the heels of a 16-3 run to end the opening half, actually morphed into a 31-3 stretch that all but closed out the contest.

It was powered in part by Megan MacLeod, who posted 11 points in the decisive third quarter, including seven straight points that took a seven-point Lions lead and stretched it to 14 all on her own.

She finished with a game-high 20 points, one better than teammate Katrina Collins-Samuel, whose 19-point night propelled her into second place on York’s all-time scoring list.

“We did get the win yesterday, so we’re happy to get the split,” Kreiner said, taking the optimistic view of the lopsided loss.

McDonough, who finished with the same 12 points she left the first quarter with, tying sophomore Sofia Lluch for tops on her team, said it was a disappointing finish to the pre-Christmas portion of the Thunderwolves schedule.

“We just kind of stopped moving the ball and doing what got us that lead in the first quarter,” she said.

The Thunderwolves won’t hit the hard court again until Jan. 17 against Algoma on the road. The team has a bye to start the second half of the season.