Homeopathy, which dates back to 1796, is based on the principle that "like cures like," or the idea that a disease can be cured by ingesting a low dose of something that produces similar symptoms in a healthy person
0
Jan 20, 2019 5:00 PM By: Canadian Press 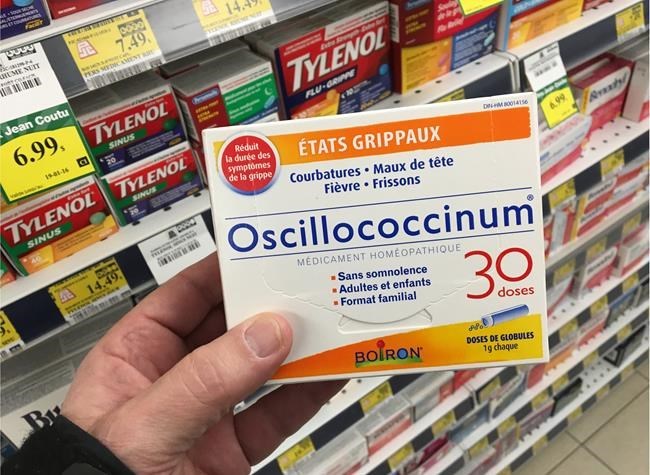 MONTREAL — A McGill University science communication group is taking aim at a commonly available homeopathic flu remedy and questioning why pharmacies continue to sell what it calls "quack remedies."

A survey of 150 Montreal pharmacies conducted last month by the McGill Office for Science and Society found that two-thirds of them stocked Oscillococcinum despite the fact that the product "does not work (and) cannot work according to our scientific knowledge," reads a publication on the office's website.

The product, which claims to shorten the duration of flu symptoms, was retailing for $37.99 for a box of 30 doses at a Montreal Jean Coutu pharmacy on Wednesday.

Oscillococcinum is a homeopathic pill that is made by taking the heart and liver of a duck and diluting it until there is no trace left of the organs, according to Jonathan Jarry, a science communicator who helped conduct the study.

Jarry, who has a master's degree in molecular biology, said he decided to target Oscillococcinum in particular because he considers it the most "egregious" of homeopathic products on the market. "Nothing in homeopathy really makes any sense or is scientific, but this one because of its high dilution factor is particularly ridiculous," he said.

Homeopathy, which dates back to 1796, is based on the principle that "like cures like," or the idea that a disease can be cured by ingesting a low dose of something that produces similar symptoms in a healthy person.

Unlike other herbal or alternative medications, proponents of homeopathy believe that a product becomes more potent the more it is diluted — a principle Jarry says "violates basic laws of physics, biology and chemistry."

Jarry pointed to overseas studies, including a review of the scientific data on homeopathy published in 2015 by Australia's National Health and Medical Research Council, which concluded that "there are no health conditions for which there is reliable evidence that homeopathy is effective."

But Boiron Canada, the makers of Oscillococcinum, says doctors, pharmacists and patients have been recommending and using the product for decades because it works. The company provided links to two clinical trials, conducted in 1989 and 1998, which found that patients who were given the product recovered more quickly than those who ingested a placebo.

"We fully support (pharmacies') decision to respect every Canadian's fundamental right to choose which products best suit their individual health needs, and we will continue to provide reliable options for consideration through our homeopathic medicines," the company said in a statement.

Jarry says homeopathic products are expensive and could lead people who purchase them to falsely delay seeking needed medical treatment. He questions why they are being sold by Quebec pharmacists, whose code of ethics requires them to protect the public by steering them towards effective treatment.

A spokeswoman for the Quebec Order of Pharmacists acknowledged that homeopathic products have no "proven scientific value" but said it would be difficult to ban them because they're regulated by Health Canada as a type of natural health product.

Julie Villeneuve said some pharmacists choose to stock homeopathic products in order to start a dialogue with their clients, but they could face sanctions for promoting them.

"Regardless of the school of thought to which he adheres, the code of ethics is clear: The pharmacist must practice pharmacy according to scientific data," Villeneuve wrote in a statement.

"Thus, considering the lack of scientific evidence on the effectiveness of homeopathy, a pharmacist who encourages a patient to use such products by predicting benefits would be placed in a situation of disciplinary offence."

Some 8,500 homeopathic products are approved by Health Canada, which reviews them to ensure they are safe and "are supported by either scientific evidence or other references," according to the department's website.

In 2015, Health Canada changed its labelling requirements for homeopathic cough, cold and flu products aimed at children 12 and under, stating that makers could no longer make specific health claims unless they're supported by scientific evidence.

Loblaws, the parent company of the Pharmaprix chain, said it prefers to allow patients to make their own choices, given that the products are popular and approved for sale.

"Given that these products aren't prescribed and present no danger to health, the pharmacists-owners of our network have no reason to ban them, especially since an important proportion of their clientele appreciates and requests them," senior communications director Johanne Heroux said in a statement.