'Conservation officers often work in remote areas, investigating cases….[and] many of our cases, we do not have complainants to talk to…so any help we can get from the public to put the puzzle together is beneficial'
0
Dec 5, 2017 10:00 AM By: Jeff Turl 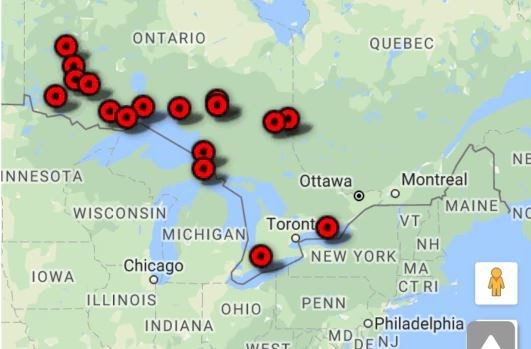 NORTH BAY — If you've got a little spare time on your hands, the Ministry of Natural Resources and Forestry could use some help cracking some cold cases.

The MNRF has set up a new interactive online map.

"Whether it be a moose shot and left to rot or anglers who exceed their daily quota, conservation officers in the province said most of their cases have very few, if any, witnesses, which means any information from the public can go a long way," says a news release from the Ministry.

“Conservation officers often work in remote areas, investigating cases and in many of our cases, we do not have complainants to talk to, so any help we can get from the public to put the puzzle together is beneficial,” Manager of enforcement Dave Hiscox said.

Officers in Dryden originally developed an interactive online map to show the number of unsolved cases in the province, and to educate the public on what conservation officers do.

That map was then taken and made into a provincial online map to educate, inform, and seek support from the public on solving some of these investigations.

“Most of our significant cases are solved with help from the public,” Hiscox continued, "and this past fall, officers saw a few cases in the region where moose have been abandoned and left to rot with their nose and tongue removed.

“There is three cases we are working on where moose were abandoned, so there’s a bit of a trend there but other than that, this fall we are seeing a lot of safety related offenses such as loading firearms in vehicles and shooting down road ways.”

He said although social media platforms like Facebook has really helped in solving some of their cases, Hiscox would like to remind callers to jot down important information you might have observed, such as license plate numbers or GPS locations when calling the tip-line.

“We often send out news releases about major convictions we get and if we are seeking the public’s help and we just see this online map as another tool to reduce natural resource violations,” Hiscox said.

The red dots that show on the map is where the violation took place and when users click on the area, a general summary of what happened along with the date, reference number and exact location will pop up.

“From there though, we would like to ask anyone if they have information for any of these cases, that they call the MNRF tips line and then our dispatch system will inform the conservation officer,” Hiscox said.

And while officers have not received any specific information thus far, Hiscox said they are doing everything they can do try to solve some of these complicated violations.