The discovery of jet fuel odours has resulted in Grand River Conservation Authority anouncing there will be no ice fishing this season at Shade's Mill Conservation Area.
Jan 18, 2019 8:00 PM By: Kenneth Armstrong 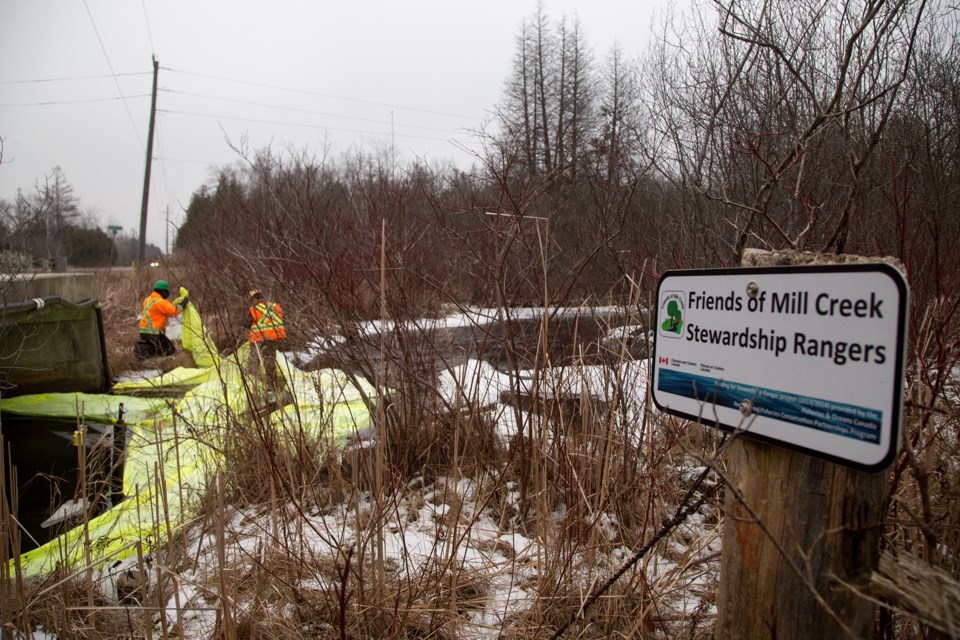 FILE PHOTO — Workers SEEN TUESDAY LAYING down boom in an effort to clean up jet fuel in Mill Creek at Concession 2 near Sideroad 20 S in Puslinch Township. The Ministry of the Environment is overseeing clean up efforts, which resulted from a tanker crash on the 401 on Sunday. Kenneth Armstrong/GuelphToday

Jet fuel from a recent tanker truck rollover has reached further into the area's waterways than first suspected, says Ontario's Ministry of the Environment, Conservation and Parks.

On Thursday, ministry staff observed jet fuel odours as far away as Shades Mill Reservoir in Cambridge. This despite an earlier statement by the ministry on Tuesday that said there had been no impact to Shade’s Mill Conservation Area.

Mill Creek and Aberfoyle Creek because contaminated sometime after the rollover of a double tanker carrying between 40,000 and 50,000 litres of jet fuel occurred in the early morning hours on Sunday.

The discovery of jet fuel odours has resulted in Grand River Conservation Authority anouncing there will be no ice fishing this season at Shade's Mill Conservation Area.

Lisa Stocco, manager of communications for the GRCA, said that it's going to be a while before the full impact is known.

"Obviously we'll want to look at the impact on the fishery and water quality," says Stocco. "We're aware that jet fuel contains an anti-icing component to it, and we're not sure if that would have any impact on the stability of the ice," said Stocco. "As a precaution — in the interest of public safety as a responsibility to the visitors of our park — we've decided not to offer ice-fishing until we have a better understanding of the impact."

Stocco said that jet fuel contains an anti-icing agent, which prompted concerns about the stability of the ice.

Belwood lake is open for ice fishing and has met ice safety requirements.

Stocco said that, as they look to the future, it's unclear whether they'll be able to run their regular programs.

There is also no word yet on the impact that this will have on wildlife in the area, said Stocco, GRCA will continue to work with the Ministry of Environment, Conservation and Parks to determine what effects there may be.

In an emailed statement to GuelphToday, ministry spokesperson Gary Wheeler said there has so far been no direct evidence of wildlife impacted by the spill.

The Guelph Humane Society and Envirnment Canada staff have also been in the field this week, said Wheeler.

Wheeler said the ministry’s Spills Action Centre dispatched an environmental officer to the scene of the jet fuel spill within about two hours after the early-morning rollover of the tanker truck.

In a GuelphToday store published Tuesday, local land owner John Johnston said clean up efforts on his land didn't begin until almost 36 hours after the rollover.

The Ministry of Transportation said on Wednesday that access to Highway 401 from the Hanlon Expressway would be closed off until some time Friday. The MTO did not immediatley respond to a request for an update made Friday afternoon.