Families who host Guelph Storm players are raising funds that will be used to buy gift cards at a Humboldt nursery for billet families to purchase a living memorial in honour of those involved in the tragedy
0
Apr 13, 2018 1:53 PM By: Tony Saxon 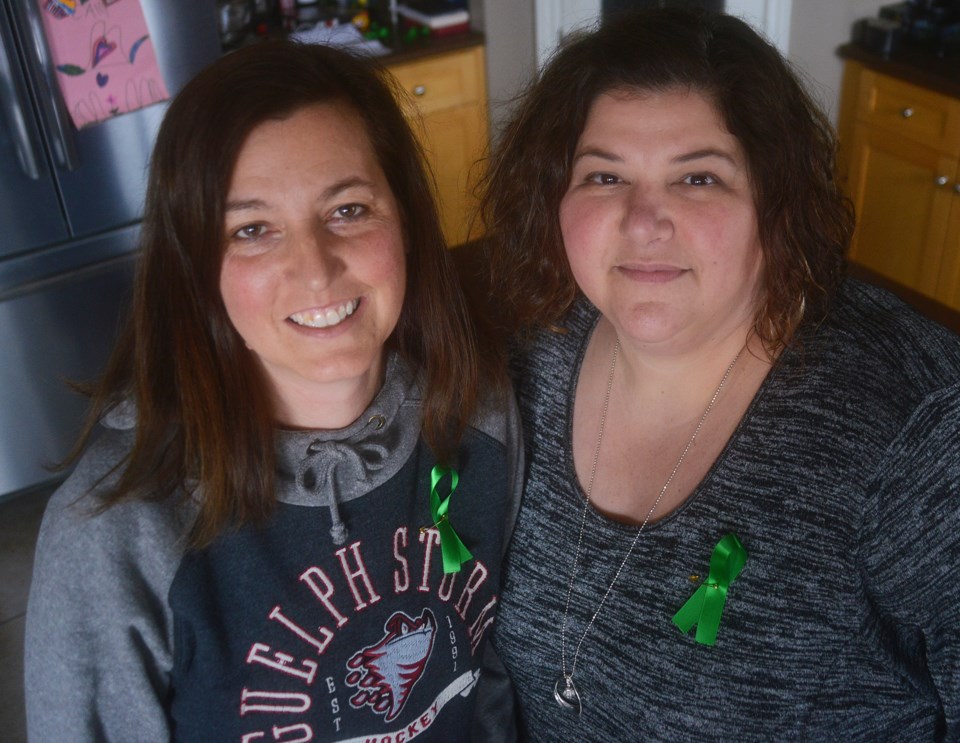 Renee Chumbley, left, and Kelly Smales are raising funds to send gift cards from a Humboldt nursery to families that billeted players and others involved in the tragedy. Tony Saxon/GuelphToday

As the Humboldt Broncos tragedy unfolded last weekend, it wasn’t long before two Guelph women started thinking of the Broncos players’ second families – the Humboldt billet homes they lived in while they pursued their hockey dreams.

They knew that the families in Humboldt would be devastated as they dealt with the loss of their “billet sons.”

“The first thing I thought of was the billets,” Smales said. “Being responsible for someone else’s child is an honour. The ripple effect of this tragedy is unbelievable.”

“You remember them all,” Chumbley said. “You’re their second parents.”

Both women remain good friends with many of the players – and their families – they have billeted. They attend weddings. They chat with moms. They visit. They vacation together.

“What surprised me every time is how quickly they find their way into your heart,” Smales said of the players.

Having a sense of the degree of loss the Humboldt billets had to be feeling, Chumbley and Smales wanted to do something for them.

“I knew right away that we had to do something, but I wondered what could we do that’s more meaningful than just donating money?” said Chumbley, who currently billets Storm defenceman Ryan Merkley.

Her friend Smales came up with the “beautiful idea” of purchasing gift cards at a nursery in Humboldt that would later be given to billet families and the families of the others who were on the bus that day.

Those gift cards will be used to purchase a tree or shrub to plant in memory of those lost and affected.

“It will be a sign of hope and courage,” Smales said.

They have already spoken to the owner of the nursery and hope to raise at least $3,000 for enough trees for everyone.

Donation details can be found on their Facebook page.

Chumbley said more important than the gift cards will be notes of love and courage written by Guelph billets that will accompany them.

“Ultimately, it’s the gesture,” Smales said. “They will know we understand the bonds they have with their billets.”

There is no rush to complete their goal. The gift cards, and the notes of support, “will be there for them when they’re ready,” Chumbley said.

Chumbley said she was hardest hit by the photo of the Broncos players in the dressing room that was widely circulated on social media, showing them smiling and laughing after a big win. They all sported hair dyed peroxide-blonde, a bonding exercise for their their playoff run.

Days before the accident her home had been filled with Guelph Storm players talking excitedly about getting together later that night to dye their hair for their own upcoming playoffs.

“They were so upbeat and excited,” she remembers of the Storm players, “and when I saw the photo of the Humboldt players I envisioned them having a night like that. Upbeat, excited and having fun.

"I remember thinking after the accident, that could have been the boys that were in my kitchen."