No evidence to suggest patient information has been breached, says the CEO of the hospital where the issue has originated
Jan 17, 2019 3:48 PM By: Arron Pickard 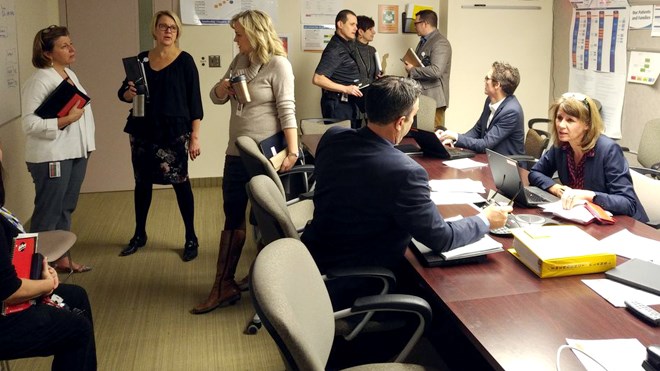 Health Sciences North officials meet in the hospital's Incident Command Centre as staff at hospitals across the northeast struggle with the impact of a computer virus affecting 24 hospitals. (Twitter.com/@Dominic_Giroux

SUDBURY - Health Sciences North's CEO said there is no evidence to suggest that privacy of patient information has been breached as a result of the virus that has impacted hospital operations today.

As a preventive measure, systems at HSN were put on downtime, successfully avoiding dissemination of the virus, said HSN, said Dominic Giroux in a series of tweets.

"We have no evidence to suggest that privacy of patient information has been breached," Giroux tweeted.

The impact has been far reaching, too, as 24 Northeastern Ontario hospitals have been impacted by the virus. Earlier today, hospital spokesperson Jason Turnbull said the virus is not a ransomware attack on the hospital.

Giroux called it a "zero-day virus", which basically means the virus is previously unknown and antivirus software is not available to catch it.

At HSN, about 75 per cent of the systems are impacted by the downtime.

Giroux said in a tweet this afternoon that HSN is working to begin restoring critical systems by tomorrow and planning to re-schedule canceled chemotherapy and radiation treatments this weekend.

“We apologize for any inconvenience this may cause our patients. We are working closely with HSN to support them while their IT issues are being resolved. Once we are able to reconnect to HSN, we will notify our patients.

“All other areas of SAH remain open and accessible to the public.

HSN began noticing problems with its computer system at 8 a.m. Tuesday. It is not yet known how the hospital’s IT systems became afflicted with the virus. While HSN has said patient care is not impacted, wait times at the emergency department will be longer, while certain elective procedures and surgeries in the next 24 to 48 hours could be rescheduled.