Young mother fighting for her life after Highway 11 crash 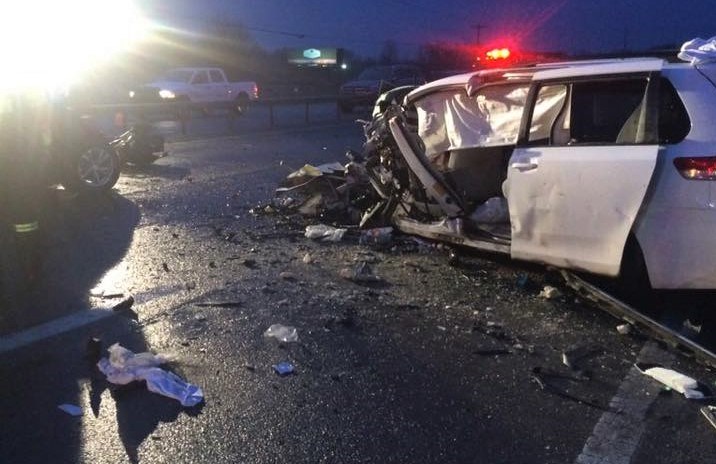 A mother of two suffered life-threatening injuries after her vehicle, the white minivan above, was rammed head-on by a wrong-way driver on Highway 11. Mark MacLean for OrilliaMatters

A mother of two young children is fighting for her life in a Toronto hospital today after a devastating crash on Highway 11 Wednesday night.

The woman has been identified on social media as Jennilynn Reed. A gofundme account has been set up to help raise money for the family.

At about 7 p.m. Wednesday night, Reed was driving in the north-bound lanes of Highway 11 when a wrong-way driver collided head-on with her vehicle. Her children sustained minor injuries, but Reed had to be airlifted to Toronto. Orillia OPP say she has life-threatening injuries.

Orillia’s Mark MacLean was just behind Reed’s vehicle moments before the crash that occurred near Soules Road.

“It was an awful scene,” MacLean told OrilliaMatters.

MacLean, like several others, quickly pulled over and tried to lend a hand.

“The first thing I did was rush to the woman who was trapped in the white van to comfort her until a paramedic arrived,” said MacLean of Reed. “Another gentleman and lady smashed out a window to relieve the smoke from inside and they took two young children out of the van also.”

He said he just “wanted to do what (he) could to help.”

He said it was a heart-breaking incident. “It hurt me inside. When I got home, couldn't sleep … I’m just praying for them.”

According to the Orillia OPP, an off-duty doctor, nurse, and paramedic along with several concerned citizens such as MacLean tended to the injured parties and assisted Severn Township firefighters and County of Simcoe paramedics.

OPP Sgt. Peter Leon said police are unsure why or how the driver managed to enter the highway and drive in the wrong direction. “It has certainly left us scratching our heads, but right now, we don’t really know what happened.”

He said the OPP Central Region technical investigators were on the scene for several hours investigating. The highway was closed from just after 7 p.m., when the crash occurred, to just after 1 a.m. “It’s a pretty extended period of time given it is such a busy stretch of highway,” said Leon.

To help police piece together what happened, they are appealing for witnesses to come forward. “If someone saw the vehicle, saw where it came on to the highway, that would help our investigators,” said Leon.