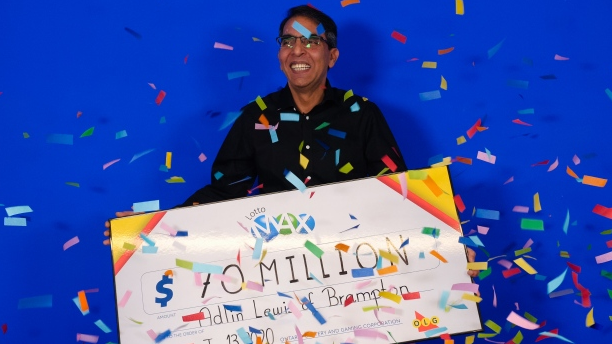 TORONTO — Adlin Lewis first got an error message when he tried to use the OLG lottery app to check his Lotto Max ticket last Wednesday morning.

He was warming up his car to go to work, so he had time to try the app again.

That's when the 49-year-old credit risk manager from Brampton learned his life was about to change.

This time, the message that popped up was Big Winner and the number 70.

It meant Lewis had won the record-breaking $70 million jackpot.

"I was shocked and wanted to confirm what I saw so I went online to see the winning numbers and one by one they matched," he said Monday in Toronto after picking up a cheque for the biggest lottery prize in Canadian history.

Lewis said even though he knew what he had won, he still went to work and contemplated how to share the news with his wife.

"I wanted to tell her in a special way with a trip or something creative, but I couldn't keep the news to myself," he said.

Lewis ended up waking his wife up in the early hours of Thursday morning to announce their good fortune.

As for the couple's plans for the money, Lewis said they include some investments, taking many trips, and enjoying life.