The 19-year-old-man accused of killing a fellow inmate at a local prison had his first courtroom appearance Wednesday. Adam Capay briefly appeared at the Thunder Bay Ontario Court of Justice to set a return date.
0
Jun 6, 2012 12:16 PM By: Jeff Labine 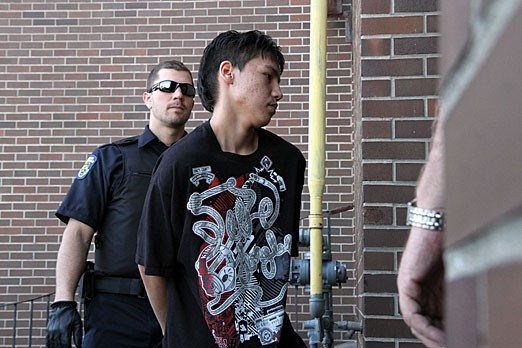 Adam Capay is brought into the Ontario Court of Justice on June 6, 2012. (Jeff Labine, tbnewswatch.com)

The 19-year-old-man accused of killing a fellow inmate at a local prison had his first courtroom appearance Wednesday.

Both men were serving sentences at the Thunder Bay Correctional Centre. It’s alleged the two men were involved in a violent altercation just before 6 a.m. Sunday.

Police say Quisses and Capay were in the common room at the time of the incident. That common area houses around 30 inmates.

“They all would have access to one another. It’s not as if it’s a cell type area that you would typically see in a jail,” Lewis told media Tuesday.

Capay will appear in court again on July 12 to be spoken to and remains in police custody.

None of the charges against the accused have been proven in court.