Thunder Bay Police Service officers served up another tournament, but this time it’s off the ice and onto the volleyball court. The Aboriginal Liaison Committee organized the youth volleyball tournament with help from other area police services.
0
Jan 17, 2010 11:25 AM By: Jeff Labine 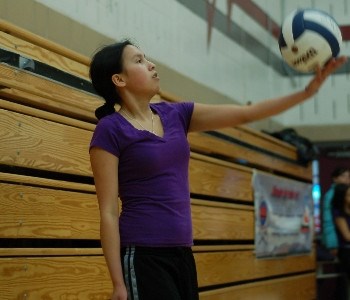 Thunder Bay Police Service officers served up another tournament, but this time it’s off the ice and onto the volleyball court.

The Aboriginal Liaison Committee organized the youth volleyball tournament with help from other area police services. The tournament was held at Sir Winston Churchill High School and was aimed at trying to get Aboriginal youth to come out and get to know the officers.

More than 50 youth created the eight volleyball teams that competed for the Community Cup. Rose Gopher, 17, moved from Deer Lake to start school at Dennis Franklin Cromarty High School in September. Rose is on the volleyball team and was able to find some good competition when playing at the tournament.

"I love volleyball," said Rose. "I grew up on a reserve playing it. Even if you aren’t good at it, go out and try new things."

Rose said she thought it was a good idea to get to know the local officers. It was a way for her to see who was out there protecting the city.

Matthew Thompson, 17, who goes to St. Patrick's High School, said the tournament was a good way to bridge the gap between the police and Aboriginal youth.

"I wanted to participate in something that could potentially be groundbreaking," Matthew said. "I think sports brings people together because you have to work together to accomplish all your goals."

Matthew said he hasn’t played much volleyball but is active doing other sports. He enjoys mix martial arts and he is on the wrestling team.

Patrick Cheechoo, one of the organizers of the event and an advisor for the Aboriginal Liaison Committee, said many of the youth on the courts came early so they could start playing.

"Sports and recreation and youth programming is something that I’ve been doing all my life," Cheechoo said. "We start first thing in the morning and they are here ready to go. Everyone’s having a great time."

Cheechoo said that last year’s hockey tournament was a success and thinks the volleyball tournament will be one as well. He said it was gratifying to see how much support the city gives, and the support from the youth involved.

Cheechoo said the hockey tournament would become an annual event with plans to have other events such as bowling and possibly canoe outings.