Lakehead women earn pair of prestigious awards for giving back to Thunder Bay community.
May 24, 2020 1:44 PM By: Leith Dunick 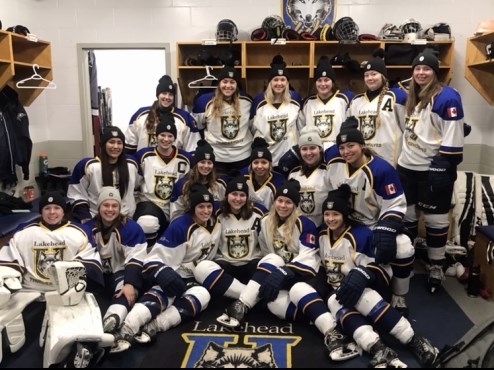 Both awards are given in recogniton of their contributions to local commuity and charitable organizations.

When not training or playing their way into the ACHA championship tournament, the Wolves were busy in the community.

The team helped out a number of organizations including PRO Kids to help raise money for youngsters who might otherwise not be able to afford to take part in recreational activities.

They also took part in the Tim Hortons Smile Cookie campaign and the Learn to Skate program with the George Jeffrey Children's Centre.

The Wolves partnered with country music stars Chad Brownlee, Dean Brody and Dallas Smith to raise money with a VIP meet-and-greet draw and participated in Beanies for Brain Cancer in support of the Princess Margaret Cancer Centre.

If that's not enough, the team was involved with the Special Olympics Canada Winter Games and hosted an event called togetHER, supporting women in sports. They also helped sell 50/50 tickets, chuck-a-pucks and programs at LU men's hockey games.