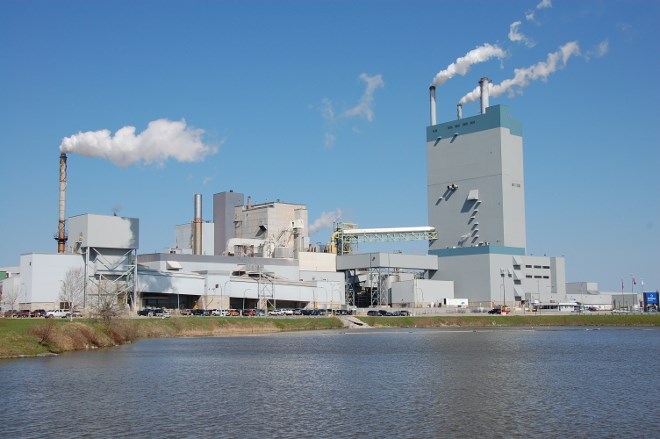 The Dryden paper mill, now owned by Domtar, dumped tons of mercury into the English-Wabigoon River during the 1960s.

WABASEEMOONG INDEPENDENT NATIONS – A new agreement with the federal government will help a northwestern Ontario First Nation address the impacts of decades of mercury poisoning.

The agreement includes a federal commitment of up to $19.5 million for the design and construction of a health centre in Wabaseemoong Independent Nations, also known as Whitedog. The First Nation is located about 100 kilometres northwest of Kenora.

Minister of Indigenous Services Marc Miller signed on to the agreement along with Wabaseemoong chief Waylon Scott during a virtual signing ceremony on Friday.

Scott had confirmed an unofficial commitment from the federal government in April, when a similar agreement with nearby Grassy Narrows First Nation, or Asubpeeschoseewagong Netum Anishinabek, was announced.

The Grassy Narrows health centre, with the same $19.5 million commitment, was expected to be a 24-bed facility.

In addition to the health centre, the Wabaseemoong agreement will see a community health assessment conducted by 2022 to identify specific health needs in the community.

The assessment will guide the development of a “distinctions-based comprehensive health service delivery plan” for the First Nation, according to a government release.

A Dryden pulp and paper mill, owned at the time by Reed Paper, discharged tons of mercury-contaminated effluent into the English-Wabigoon River system during the 1960s.

Researchers have found over 90 per cent of residents in Wabaseemoong and Grassy Narrows continue to show signs of mercury poisoning. Recent studies and reports have suggested there could be ongoing sources of contamination at the mill site.

Chief Scott heralded the agreement as a major step forward in addressing the ongoing effects of that legacy.

“This is a huge accomplishment, something that we take great pride in,” he said. “We definitely have taken a leap forward for our community, when we get this going.”

The centre is expected to take 12 to 14 months to build, though no date has yet been set for construction to begin.