The Thunder Bay Christian School has already produced more NHLers than most communities in Canada, and that was without an outdoor rink at their disposal.
0
Jan 18, 2010 2:21 PM By: Leith Dunick 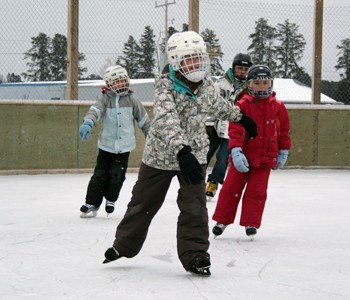 Look out hockey world, they have one now, thanks to the generosity of the Staal brothers of Oliver-Paipoonge.

On Monday the 125 students at the Cooper Road school took to the ice for the first time, gliding their way around the $40,000 boarded rink, some with the polished strides of a young Brian Orser or Elizabeth Manley, others more haltingly and with more trepidation.

It was well worth the lengthy wait, said 12-year-old Julia Himanen, a Grade 7 student at the school.

"During class we could see them working, because we have windows, and so we would watch them making the rink and say, "Yes, it’s almost done!" she said. "They put a lot of effort into this hockey rink, and they did a really good job."

Bea Hayen, principal at the JK-to-Grade-10 school, said the idea originated with the school’s booster club, who thought building an outdoor rink would serve the students well.

They turned to their most famous alumni – Eric, Jordan, Marc and Jared Staal – not for money, but for supplies.

The brothers honed their hockey skills on a backyard rink built by their father Henry, but after they left to seek their fame and fortune in far-off locales like Raleigh, N.C., Pittsburgh, New York and, in Jared’s case, possibly Phoenix one day, the rink was torn down.

"They contacted the Staals, thinking that they had maybe some of the things left from their home rink, and maybe (we) could get that and set it up (here). The Staals talked that over and they decided that no, they were going to do a rink," Hayen said, a light dusting of snow falling as her students excitedly lapped the regulation ice surface time and time again.

Father Henry Staal, whose eldest son Eric will don the red and white jersey next month and represent Canada at the upcoming Vancouver Olympic Games, said his boys spent a lot of time at the private, tuition-funded school and it was a natural way for them to give something back.

"We said, they don’t have an outdoor rink here and they would have loved one when they were here. Now they’re able to do it. They could give sweaters or give money, but it’s not quite the same," said Henry Staal, joined by his wife Linda for a ceremonial ribbon cutting officially opening the rink, which was ready late last winter, but could not be flooded for technical reasons.

"They’ve actually been out here in the summer and looked at it and they’re pretty proud of it. And I’m sure as time goes on, there will be improvements being made by them. Here I am spending their money already."

Students will use the rink during recess, and Hayen said she suspected gym classes will also make use of the ice as part of their curriculum. Through the school, community groups will also be able to book the surface.