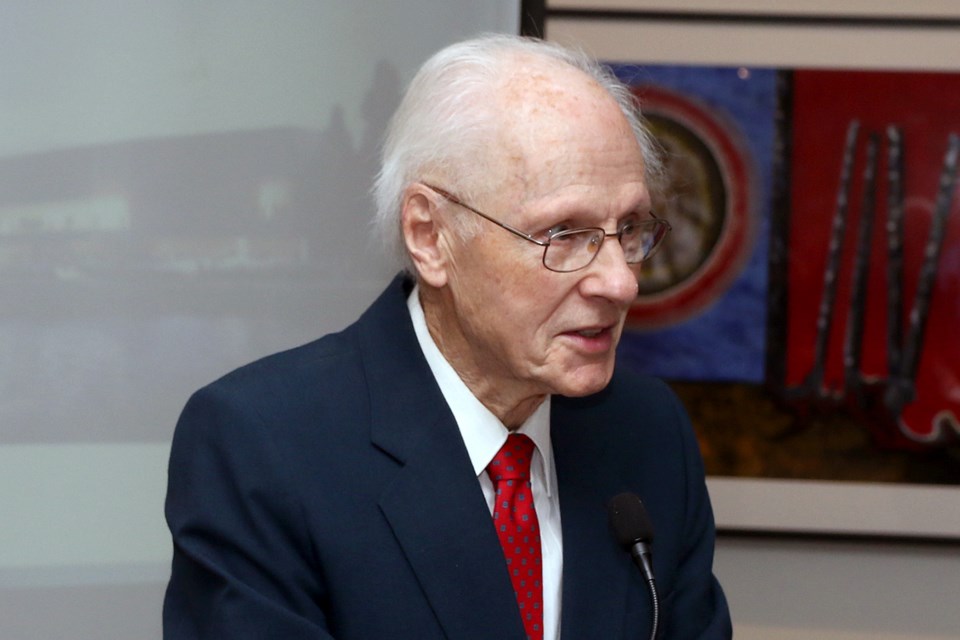 THUNDER BAY – Jake Black is a big believer that you can’t take it with you.

He’s also a big believer in the arts.

It came as no surprise on Friday then, that he stepped up with the single-biggest donation in the Thunder Bay Art Gallery’s $3.5-million capital campaign to build a new waterfront facility, handing over the first installment of a four-year, $800,000 gift.

Combined with a $250,000 donation from the John Andrews Foundation and $50,000 each from Copperfin Credit Union and $50,000 from Intercity Industrial Supply, altogether the Art Gallery hauled in $1.15 million, nearly a third of the campaign target.

“It’s mainly because of my interest in the arts. Music and the visual arts have been a big part of my life,” said Black, adding he used to teach arts in school for many years.

“I was always surrounded by art experiences and I saw an opportunity that they were having a local campaign and wanted to have support from people to donate. And that’s what I did, feeling I could be as much of a supporter as anybody. I had taken my savings and I’m getting up in years and I feel you can’t take it with you so I wanted to something of a local nature and it was this art gallery.”

Black said the gallery will be a drawing card for tourists and a landmark attraction on Thunder Bay’s waterfront.

“I really felt this was something I was really particularly interested in. And I see the versatility in it. It has so many possibilities in the arts, and not just visual arts, but other uses I can see taking place there – film projections and a just a host of other uses, along with the opportunity to do workshops in the arts, as well as the viewing of people’s work,” Black said.

Sharon Godwin, executive director of the Thunder Bay Art Gallery, said she was awestruck when Black first walked in and told her of his intention to make such a large donation to the project.

“It’s unprecedented. I don’t think there has been another gift of that level for a cultural project in the community, as far as I know, in all of its history,” she said.

“Here’s a lovely artist, member and educator who’s been a member of the gallery and supporting this community through his work for a number of years. It’s so gratifying for the gallery. We just are so thankful.”

Godwin, who hopes to break ground on the new facility next summer, pending the outcome of the environmental assessment process, said they’ve now raised $2.4 million of their $3.5-million target, but there’s still a significant way to go.

Friday’s donations have really elevated the campaign, she said.

“There are many, many people that we know who are very interested in supporting the project. We hear it all the time. So we feel we’re going to get there, but to have this level of support from these individuals is inspiring to others and will inspire others to give to the program.”

The $33-million project has raised about $29.9 million, including $5 million from the city, to date.