Fetal alcohol spectrum disorder is a major problem in Thunder Bay and Northwestern Ontario. But it’s one that doesn’t get much attention.
Jun 19, 2012 2:27 PM By: Leith Dunick 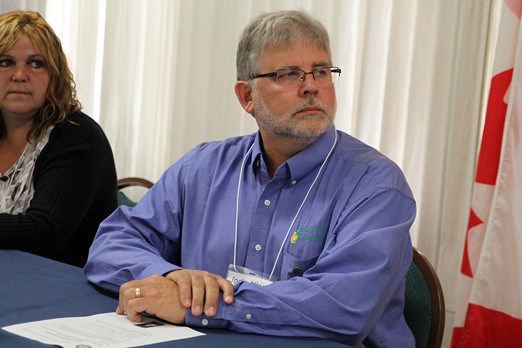 Minnesota's Jody Allen Crowe, co-founder of Healthy Brains for Babies, will be the keynote speaker Wednesday at at the Rotary Club of Thunder Bay and Nipigon's Beginning the Journey: Fetal Alcohol Syndrome Journey workshop being held at Confederation College. (Leith Dunick, tbnewswatch.com)

But it’s one that doesn’t get much attention. This needs to change, say organizers of Wednesday’s sold-out FASD workshop, being held at Confederation College.

Stopping it in its tracks is the first step, says a local FASD educator.

“There is nothing on the prevention of FASD specifically, and we need that,” said Marilyn Leiterman on Tuesday.

“The need is huge. There aren’t a lot of places to send anyone with FASD.”

David Legge, a former family physician-turned-coroner, presented some sobering statistics on the eve of the conference.

According numbers he’s uncovered, half of Canadian females drink socially, a number he expects is higher in Thunder Bay and its environs.

Half of all pregnancies are unplanned, he added.

“The logic, then, is that one-quarter of all newborns are exposed to alcohol.”

The damage to the brain, which is irreversible, can cause everything from birth defects to personality disorders later in life, issues that in many cases go misdiagnosed if recognized at all.

“Prevention here is the key,” Legge said. “It is an epidemic. It’s probably a pandemic around the world.”
Legge said he has no idea exactly how many people are living with the aftereffects of the disease in this part of the country.

“It’s basically a problem that’s been under the radar. Ministries of health, probably all over the world, probably haven’t been aware of it,” said Legge.

“It’s only been known for about 35 years that alcohol will cause brain damage in children. So it takes time and obviously there are many other medical problems that have higher profile. That could change, I suppose.”

Concrete action is what Legge would like to see develop from Wednesday’s event. Awareness simply isn’t enough, although the introduction of a local chapter of the U.S.-based Healthy Brains for Children organization would be a good start.

“I believe it’s along the lines of a co-ordinating agency to get everyone together so the knowledge is properly focused, shall we say, primarily for prevention. I have my own ideas of looking at a dedicated diagnostic clinic here, which I think the time is right for.”

At present there are referrals being made to hospitals in Toronto, he said.

“But wouldn’t it be nice if a mother who thinks they might have a problem, whether they’re pregnant or not, can go to a local clinic and have the privacy there and not have to worry about the finances and that sort of thing,” Legge said.

“It’s a very sensitive issue too. People do not like to admit that they’ve been drinking during situations … and that has to be overcome in many ways, including cultural sensitivities and understanding.”

Justine Bertrand, an occupational therapist at the Thunder Bay Regional Health Sciences Centre, was the driving force behind the Rotary Clubs of Thunder Bay and Nipigon bringing the conference to the city.

Bertrand, who often sees the aftereffects of the disease in her adult clients, said the vast majority of women don’t know they’re pregnant and it’s important they start thinking responsibly if the possibility exists.

“How do we get women to think when they’re sexually active that maybe they shouldn’t be drinking or checking more regularly if they do find out their pregnant,” she said.

Jody Allen Crowe, the executive director for Healthy Brains for Children, said a local chapter would focus on stopping FASD in its tracks.

“We like to say we shine the bright light on prevention in the community. Once we start talking about it, things start to happen,” Crowe said, noting the organization is set up much like Mothers Against Drunk Driving, with community people working to solve the problem.

“We talk to educators and we remind them that they can be working with kids in the school. We have communication with public nurses."