A local waterfront development critic says he’s still shocked after receiving an indefinite ban from Marina Park. Jon Hutt said he was walking down Pearl Street on Dec.21 when he noticed a gate on the street’s Marina Park entrance had been removed.
0
Jan 15, 2010 6:41 PM By: Jamie Smith 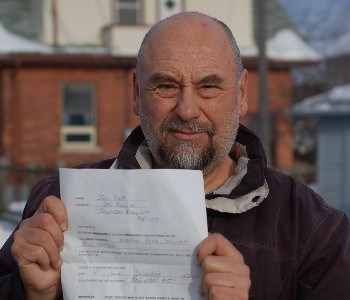 Jon Hutt said he was walking down Pearl Street on Dec.21 when he noticed a gate on the street’s Marina Park entrance had been removed. Seeing no construction activity or signage, Hutt said he wanted to take a closer look at the recent development on Prince Arthur’s Landing.

Soon after entering the park, Hutt said he was approached by a construction worker and told to leave.

After a request to the man for something in writing, Hutt said the worker drove to the Waterfront Development Office near the Pool Six site.

Within 10 minutes, Hutt said three police cars arrived at the scene to serve him a trespassing notice.

Hutt said he left the site after speaking with police, but he added that has returned every day to parts of the park that are still open to the public.

On Friday, Hutt said he met city officials during a regular park visit. He said those city officials told him the trespass notice he received earlier is for the entire park, not just the construction site.

"I’ve been banned from Marina Park. I can’t got to the Blues Festival, I can’t go to Canada Day, I can’t do anything in the park forever unless I ask them," Hutt said.

Hutt says he believes his vocal opposition to the park’s development is what led to the indefinite ban. Hutt has been involved with Friends of Marina Park and has occasionally written letters to local media and city officials since the beginning of the waterfront debate.

Armed with a camera, Hutt has been documenting the park’s development and questioning city officials when he believes the city and contractors aren’t acting in the best interests of Thunder Bay.

"Whenever I see them doing something wrong I tell them…when I don’t think it’s right," Hutt said. "People have a right to disagree with something. They shouldn’t be punished for it… I could see if I was setting fire to bulldozers but I was just walking around there."

"This happens after repeat occurrences. I mean if someone is there and they’re there innocently, the landowner or the contractor will ask the person to leave and if they leave then there’s no issue," Alexander said. "If they refuse to leave then they have to come up with a mechanism to make sure that they stay out."

"For the time being he’s prohibited from Marina Park and as he has concerns about that we’ll consider his requests for a refinement of that trespass notice," Alexander said.

Hutt said he’s still in shock because he can’t go to the park that’s been his favourite place in town for more than 20 years.

"I don’t know what to feel," he said. "It’s like somebody’s taken something away from me. All of a sudden you can’t go to your favourite place in town…I didn’t do anything wrong and I don’t feel that I should be treated this way."