There is currently low risk air quality conditions in Thunder Bay, though alerts have been issued throughout Minnesota.
Aug 17, 2018 5:19 PM By: Matt Vis 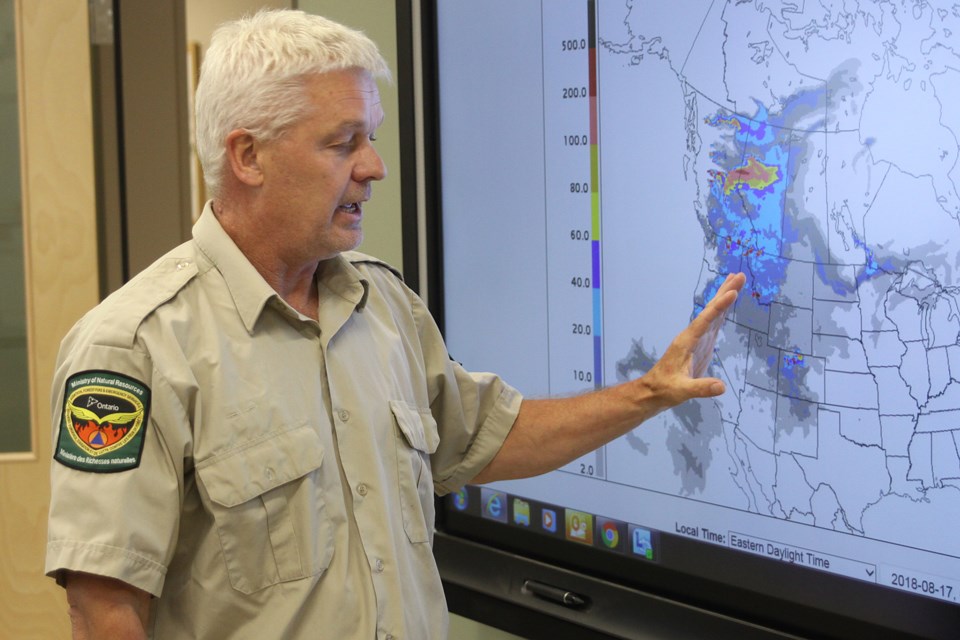 THUNDER BAY – Smoke from western wildfires is present in the Thunder Bay area, though the impact air quality is expected to be less than south of the border where advisories have been issued.

Forest fires, which are raging throughout British Columbia, are sending blankets of smoke into the atmosphere which is spreading east across North America.

Environment Canada has Thunder Bay on Friday at a low risk for air quality, with that expected to continue through the end of Saturday. Alerts had been declared throughout Minnesota, including for Grand Portage and Duluth and extending south to the Twin Cities.

Kip Miller, a fire operations supervisor in Thunder Bay for the Aviation, Forest Fire and Emergency Services branch of the Ministry of Natural Resources, expects the hint of smoke to be present during the weekend.

“I think the smoke that you see is what you’re going to see for the next while,” Miller said.

“That smoke is all coming from western Canada and the western United States. We’re hoping over the next few days it will dissipate, given the change in the air mass and change in the wind direction.”

The smoke is starting to have an impact in western provinces, as Calgary and Edmonton are expected to have high risk air quality conditions Friday night and a number of cities in Manitoba and Saskatchewan are forecasted to be in moderate risk conditions.

A forecast map on the Environment Canada website shows the smoke patterns aren’t moving straight east across the continent, but includes dips north and south.

“As the smoke rises into the upper atmosphere, it’s pushed and it sheers over and comes across and typically follows the wind and the weather patterns,” Miller said.

Miller said fires in Woodland Caribou Provincial Park could contribute to smoky conditions in the Red Lake area, but there isn’t likely to be smoke from any other Northwestern Ontario fires that is noticed in municipalities across the region.

“In the Thunder Bay area we have four fires we’re managing up in Wabikimi Park that will not impact the smoke or air quality here,” Miller said.

The ministry had declared a restricted fire zone across much of Northwestern Ontario, with that fire ban carrying into the weekend for the Kenora, Fort Frances and Dryden districts, along with the southern portions of the Thunder Bay, Sioux Lookout and Red Lake districts.

Within the fire ban, open fires such as campfires and the burning of debris is not permitted. Portable gas and propane stoves are allowed to be used if certain rules are followed.