A trip to buy paint supplies turned into a chance for Michel Dumont to teach others the art of candle making. Dumont started candle making about 25 years ago but he took a break from the craft.
0
Sep 28, 2012 4:25 PM By: Jeff Labine 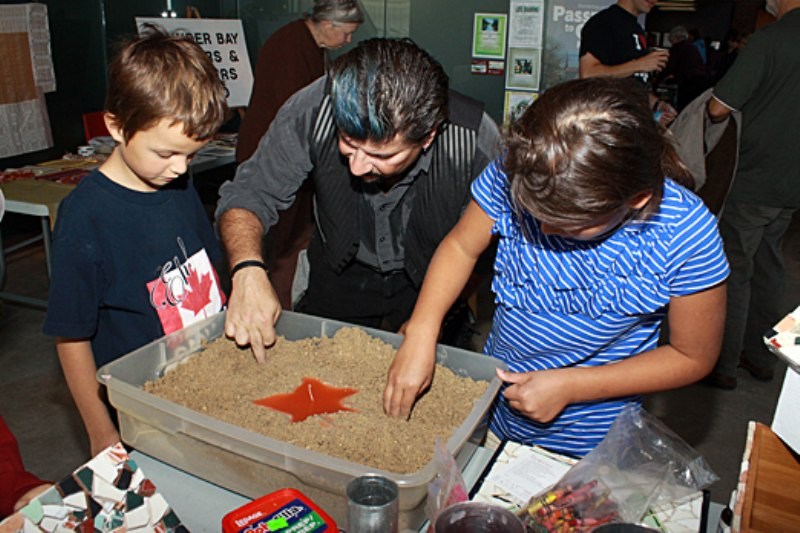 A trip to buy paint supplies turned into a chance for Michel Dumont to teach others the art of candle making.

Dumont started candle making about 25 years ago but he took a break from the craft. He paid a visit to the Painted Turtle for art supplies and told them he wanted to get back into his craft. The conversation led him to host his own workshop at the Baggage Building Arts Centre at Prince Arthur’s Landing on Friday.

Dumont was busy with a number of children teaching them how to make sand candles. The children make a design in the sand and then Dumont pours the hot wax into the created mould.

“Kids love doing this,” Dumont said. “Playing in the sand is kind of fun. I told some people on Facebook I was making sand candles and they didn’t know what that meant. It’s actually pretty easy. I’ve been selling candles at art auctions for a long time. Some candles can cost $30 or $40 and with the party light phase, people are spending hundreds of dollars on candles. I can make them for two or three dollars and make something beautiful that you could sell for $30 or $40.”

Dumont was one of about 17 other local artists who participated in the first day of the third annual Culture Days. The weekend-long event features various artists, local films and other cultural activities.

It’s also the first year to feature the Baggage Building Arts Centre, which Dumont said helps to bring more people down to the waterfront.

Lorraine Cull, One of the coordinators at the Baggage Building, said they opened the art centre in June and having it apart of Culture Days was something they have been talking about for some time.

“It’s a great venue to showcase what there is to see cultural in Thunder Bay,” Cull said. “There’s 17 different people and organizations from dance to theatre and craft and art. Being able to have all of those people here in one room where people can come and see that this is all part of who we are.”

Mayor Keith Hobbs said over the years there’s been both a push and natural progression to showcase more of Thunder Bay’s cultural side.

“We’re such a diverse city,” Hobbs said. “We’re promoting arts and heritage and it’s a tourist attraction as well. The fact that we have a cultural building at the waterfront is going to attract people as well.”

All the events are free and a full list of events can be found at the Thunder Bay website.