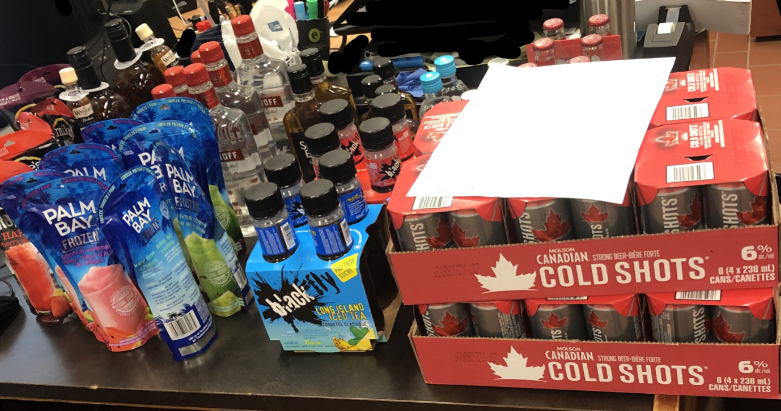 The Thunder Bay Police Service has charged two people in connection with an ongoing investigation into the black market sales of liquor.

Investigators with the services Community Response Team began an investigation earlier this month after LCBO employees observed suspicious purchasing activity. As a result of that investigation police later identified a female suspect who was purchasing liquor to illegally resell.

CRT members, with assistance from the TBPS Uniform Patrol Branch, executed a Provincial Offences Act warrant on the evening of Aug. 23. A residence in the 200 block of Manitou Street was the subject of that warrant.

As a result, officers seized alcohol with a retail value of about $400, and $1,400 CAD. A male and female at the home were charged under the Provincial Offences Liquor License Act for Unlawfully Keeping Liquor and Unlawfully Selling Liquor.

She was released with a future appearance date, but arrested again after attending an LCBO on Aug. 24 and Aug. 25, which was a violation of her probation conditions. She was scheduled to appear in bail court Monday.

This investigation included assistance from local LCBO staff and an LCBO investigator based out of Mississauga.

The black market sale of liquor represents a serious community concern as the sellers may target minors and other vulnerable citizens for profit. If you have any information about illegal liquor sales, or know of liquor being sold to minors, please call the Thunder Bay Police Service at 684-1200 or Crime Stoppers at 1-800-222-8477, online at www.p3tips.com.