City council approved a starting point for the 2017 municipal budget on Monday, voting to support a non-binding 5.4 per cent increase to tax-supported city spending.
Oct 4, 2016 3:20 AM By: Jon Thompson 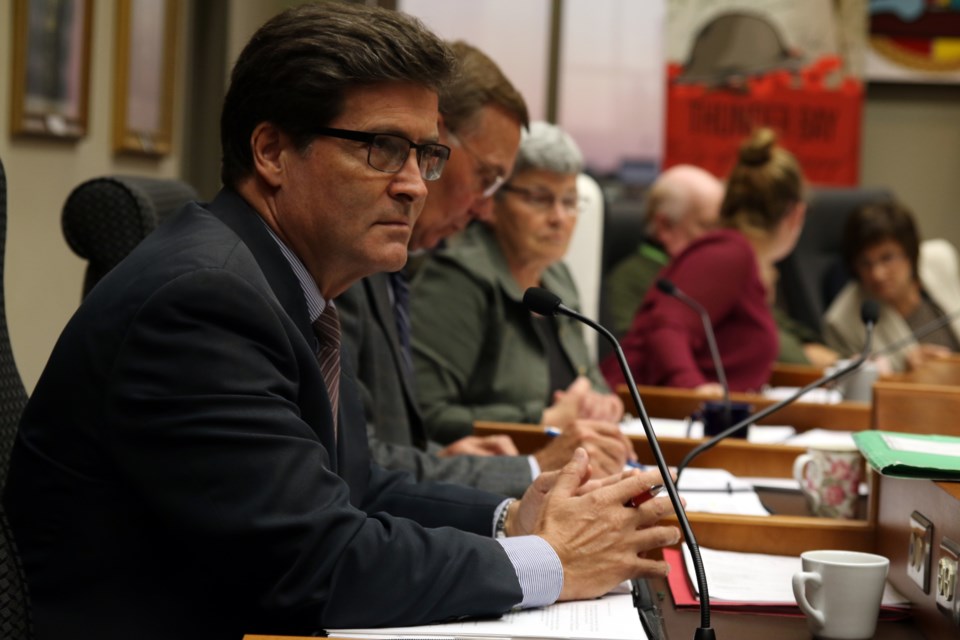 THUNDER BAY – City council has approved a starting point for the 2017 municipal budget.

On Monday, council voted to support a non-binding 5.4 per cent increase to tax-supported city spending in 2017. In its current incarnation, that would mean a 4.4 per cent tax levy increase along with a $1.8-million reduction to the city’s operations budget.

Administration’s budget direction is operating under the assumption the city will experience net zero revenue growth due to losses in tax revenue as a result of assessment drops among buildings in the industrial class.

Under its stabilization strategy, administration has increased its spending expectations around insurance and legal costs, factors it holds responsible for $2.1 million of the 2016 budget’s $3.2-million negative variance.

“However, this option number one predicts a stable budget. This excludes exigencies that would create severe pressure in various areas.”

Coun. Iain Angus, who has been vocal that recreation should take priority over infrastructure, questioned Gale over where staff would find the savings.

“In a number of occasions, you said there wasn’t anything left to give when it came to shrinking our operating budget,” Angus said.

“Where do you think you’re going to get $1.8-million without doing harm?”

While Gale expressed confidence reductions could be found, he was clear it would not be a matter of trimming fat in operations.

“It’s absolutely the case that operating budgets are under significant pressure. One-point-eight-million-dollars is a target we will strive to achieve. I think we will. However, it is impacting and there will be an impact on services with that.”

Although Current River Coun. Andrew Foulds voted to accept the budget direction, he cautioned staff he couldn’t commit to supporting the cuts they would bring forward through the exercise.

Foulds turned his attention to administration’s intention to cap infrastructure spending at 2016 levels. Since council committed to squaring its infrastructure deficit within a decade in 2014, it cut $3 million, $4.5 million and $1.1 million from its 2014, 2015 and 2016 budgets, respectively.

“We’ve had a number of items over the past number of years, we’ve budgeted a certain amount for a capital project and we missed the mark,” Foulds said.

“In my ward, the Boulevard Lake Dam, the covered rink and recently the Canada Games Complex. Are we making sure we’re getting accurate budgeting when we prepare for these capital projects?”

Budget chairman Frank Pullia pointed to the proposal’s new $1 million in services and infrastructure, including $550,000 for waste diversion, which will be moved from a ratepayer to a taxpayer supported program. The city also intends to commit $100,000 to tax exemptions for companies renovating buildings in Business Improvement Areas.

Pullia was most excited about the new $440,000 committed to capital quality objectives.

“By doing preventative maintenance and the whole thing about one dollar now instead of seven dollars later should make your roads last longer. Therefore, we save money in the long term,” he said.

“Instead of the average age of a road being seven years, if we can push that down to 10 years we’ll save money in long-term investment in our roads because they’re going to last longer.”

Even as councillors wrestled with what administration left out of its budget direction, questions arose as to what’s yet to be added in.

The Thunder Bay Police Service, which has submitted year-end deficits for five years running and is expected to finish the year $1 million in the red, has yet to present its 2017 budget. In the meantime, administration is advising purchasing the $4-million police radio system on a 2.4 per cent debenture with payments of $550,000 per year beginning in 2018.

The document also doesn’t include a three per cent planned hike to water rates in 2017 in accordance with the city’s financial plan.

“I have no difficulties with where we’re going with this and I really commend administration for trying to pull all this together and coming up with what they call ‘stabilization’ – if that’s a word we can use – stabilizing all these budget areas that we’re all over the place with and bringing them back to some sense of control,” Johnson said.

“But it’s still a fair amount of dollars for people who have a real problem on a fixed income.”