THUNDER BAY – The city’s police station has become an “embarrassment” and a safety risk.
Dec 16, 2014 2:09 PM By: TbNewsWatch.com Staff 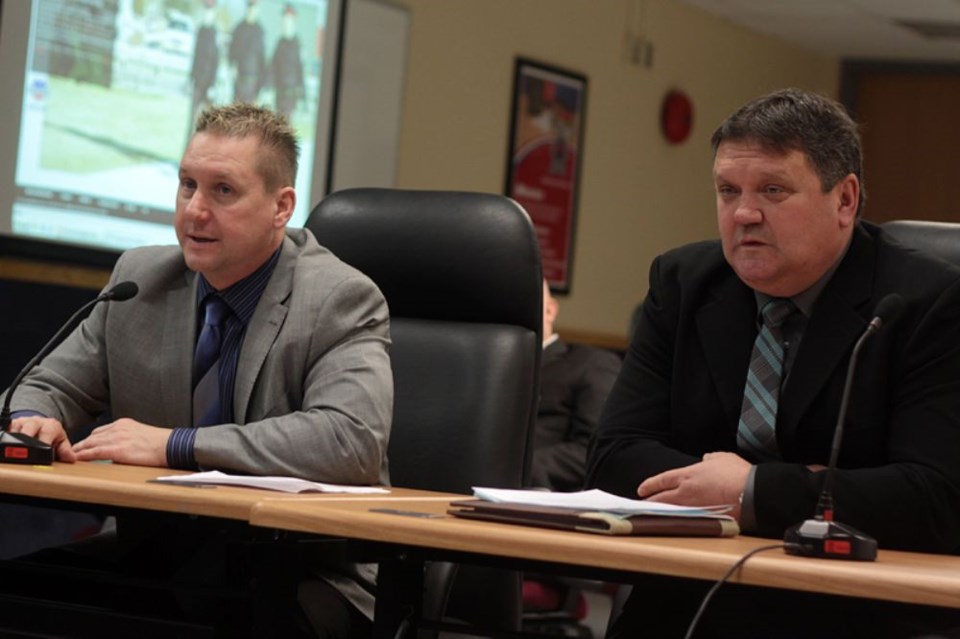 THUNDER BAY – The city’s police station has become an “embarrassment” and a safety risk.

Police association president Greg Stephenson and vice-president Jim Glena urged members of the board, particularly city councillors Joe Virdiramo and Brian McKinnon, to reconsider suspending the funding for the project until 2018.

The city had originally earmarked $3.5 million in the facilities and fleet division 2015 budget for the expansion, but since suspended that to the following budget cycle due to upcoming constraints.

Glena said the front desk, which is the first point of contact for members of the public, is among the areas that needs to be completely overhauled. He told the board it’s embarrassing.

“It’s antiquated and unwelcoming for a visitor or guest to walk into the building,” he said.

“It’s a risk for our members when we bring prisoners in or people for fingerprinting and photographing.”

They argued that the building has not received any significant upgrades since 1989, when the second floor was added.

Many things have changed since then, especially the number of different units within the police service.

“We have computer crime and a whole section for (information technology),” Stephenson said, listing the two examples. “There’s so much more stuff we have to house in this building that it’s time for it to expand.”

As time has passed there is also much more evidence being stored at the station, which is beginning to overtake its assigned space.

Police chief J.P. Levesque said expanding evidence storage space would be among the top priorities of any kind of facility upgrading.

“That kind of storage is vital to the court system to make sure cases go through smoothly and that we have evidence in front of the judge when they need it,” Levesque said.

The meeting was attended by Michael Smith, the city’s general manager of community services, who fielded questions from the board.

He told the board some work might have to be done on the building in the meantime, including a new roof and HVAC system.

Despite any expansion likely being delayed, Smith said the concerns expressed were valid and that something needs to be done in the next few years.

“Certainly the police service has grown. We acknowledge there are some concerns with space and functionality,” Smith said.

“As with any typical type of public facility they do go through an evolution and life cycle. It’s certainly time to take a look at that.”

Earlier this year police administration had been working with the city’s facilities and fleet division on planning the expansion, with plans for a final design study to be completed in late August.

At the time the plan was to build a single-storey addition, which would feature expanded evidence storage and workout facilities.

Stephenson and Glena invited members of the board to take a tour of the station to get a firsthand look at the conditions.

As well, the board requested Levesque arrange for members of council to have the opportunity to take a tour.