After defeating cancer, Michel Caza shows no signs of stopping as he races to the finish line in a triathlon in Madison, Wisconsin.
0
Sep 16, 2017 9:12 AM By: Nicole Dixon 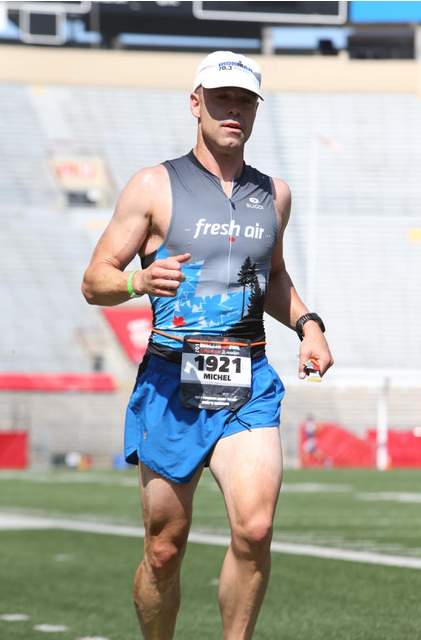 Michel Caza took part in the Ironman Wisconsin on Sept. 10.

THUNDER BAY - When Michel Caza, 42, crossed the finish line of a triathlon in Madison, Wisconsin last Saturday, he couldn’t have been more proud.

In the midst of his chemotherapy treatments last year, Caza registered for Ironman Wisconsin to prove that cancer couldn’t weaken him physically or mentally.

There are many different reasons for why people participate in triathlons, Caza said, but the vast majority are looking for a challenge and for Caza, he shared those same reasons until last year.

“I was looking for a challenge in my two previous Ironmans, but this last one really hit on a personal challenge, in that, I had a cancer last year and I went through chemotherapy,” he said.

“For me, it was something to prove that cancer hadn’t weakened me. I’m just as strong as I was before.”

Caza said having completed two triathlons before helped him get through the operation and the chemotherapy treatment.

“I was very lucky and I was able to continue to exercise like run and bike during that time, so I registered halfway through my chemotherapy treatments for that purpose.”

Finishing this race was important for Caza. His family got him through the race and they helped him beat cancer with support and love.

His family, including his wife and three children, carried him through the finish.

“Before it was a battle against myself, but this time it was different in that my thoughts were filled with everything that they’ve gone through to help me get here.”

Caza said it wasn’t his best triathlon, but he managed to push through some challenges.

“For me, I believe it was a nutritional challenge. I had cramps for most of the bike and run, but I was able to overcome that in the second half of the run.”

Caza races because of the process and the challenges his must face in each part of the competition.

“My favourite part is executing a plan as fast as I can and being able to overcome challenges such as getting those cramps, so I had to figure out what was going on and what do I need to do to correct this.”

Overcoming those challenges is exactly what Caza did.

Caza will be taking a break from triathlons as he was accepted to law school for this year.