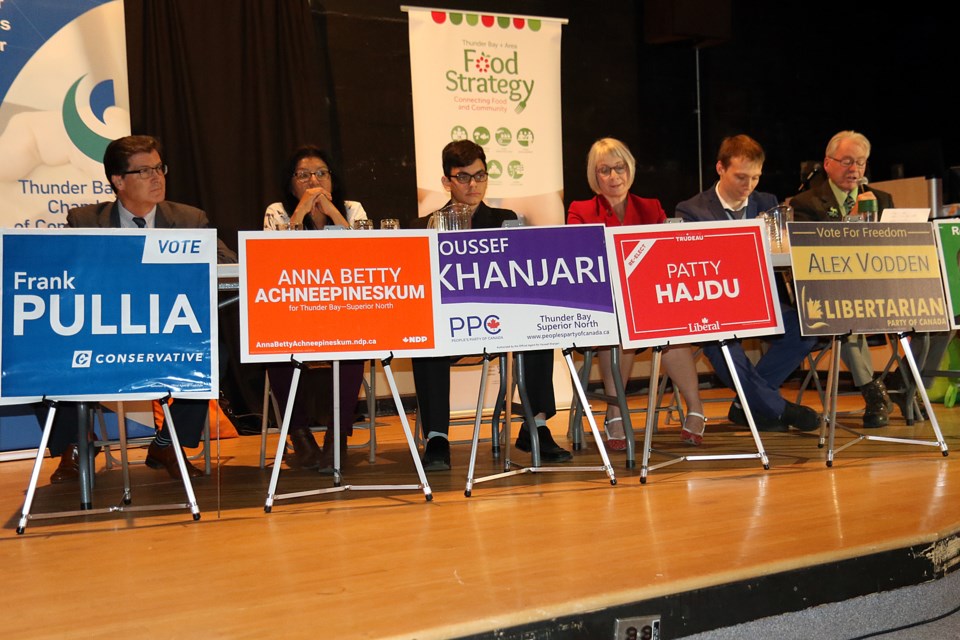 THUNDER BAY – Thunder Bay-Superior North candidates tackled a number of hot-button issues on Wednesday night as they met the electorate at a debate hosted by the Thunder Bay Chamber of Commerce.

Topics ranged from climate change to homelessness to Indigenous issues in the lone local forum to date to include all six candidates in the race.

The election hopefuls,  Liberal incumbent Patty Hajdu, Conservative Frank Pullia, the NDP’s Anna Betty Achneepineskum, Bruce Hyer of the Green Party, Youssef Khanjari of the People’s Party of Canada and Liberatarian Alex Vodden, didn’t agree on much, but they did all agree that a basic income guarantee of some sort was something to work toward.

They just didn’t agree how to get there.

Ontarians had a basic income pilot project in place, but the Conservatives under Premier Doug Ford were quick to kill the program, which was tested in three communities, including Thunder Bay.

When asked if the federal Conservatives would support a guaranteed basic income if elected, Pullia said he saw the early success of the program in Thunder Bay and would certainly make a case for doing something at the national level.

“I supported it when it was first introduced as a great way to stabilize the lives of those who need that kind of help, so they can go back to school, they can become productive members of society by not having to worry about their problems,” said Pullia, adding the province should have waited a little longer before deciding to pull the plug.

“I believe that it does work and I will support that and bring it forward to the  Conservative party to make sure that we can develop options for the people who need the help.”

Vodden, who calls Marathon home, said he believes in a basic income, but said Canadian voters should temper their expectations.

“Over the next four years, I do not believe a basic income is feasible,” he said.

Hyer, who spent seven years as an MP, elected twice under the NDP banner, said the country absolutely has to do something about poverty.

“We have gaps in income that are getting closer to those in the U.S.,” Hyer said.

“The Green Party does believe in a guaranteed liveable income. It’s in our platform. If we can afford $13 billion for a pipeline to export raw crude to China … we can afford as one of the wealthiest countries in the world to ensure that every person has the rights to live.”

Achneepineskum said the short-lived provincial program was starting to show benefits before it was abruptly shelved.

“It represented a stepping stone and provided income for those that were at a stage in  their life when they were struggling and they needed that assistance. We need to create those opportunities for individuals to return to school or provide some other type of on-the-job training or other life skills,” Achneepineskum said.

“The NDP has always fought for people.”

Hajdu, who was called out by Pullia for not stepping up to support a call by those affected by the cancellation of the Ontario project for Ottawa to take over the program, said the Liberals have fought poverty in many ways, including raising the child-benefit rate to lift 300,000 children out of poverty, a $55-billion national housing strategy and a national poverty strategy.

She also said it's a provincial jurisdiction.

“Basic income already exists in all of the provinces. It’s called social assistance,” said Hajdu, the former executive director of Shelter House. “It’s called ODSP, and I would definitely advocate that we would advocate together to work against cuts that the Ford government has been inflicting on the most vulnerable people in the province.”

Khanjari said what he liked best about the basic income project wasn’t necessarily the good that it did, but the bad behaviour it dissipated.

The PPC has a plan to tackle poverty, he added.

“I think it’s a good thing to point out that the People’s Party is the only party that is completely committed to eliminating all taxes on the poor.”

The basic income pilot project was one of several topics discussed at Wednesday’s debate, held at Confederation College. TBNewswatch will bring you answers from several other questions in the coming days.