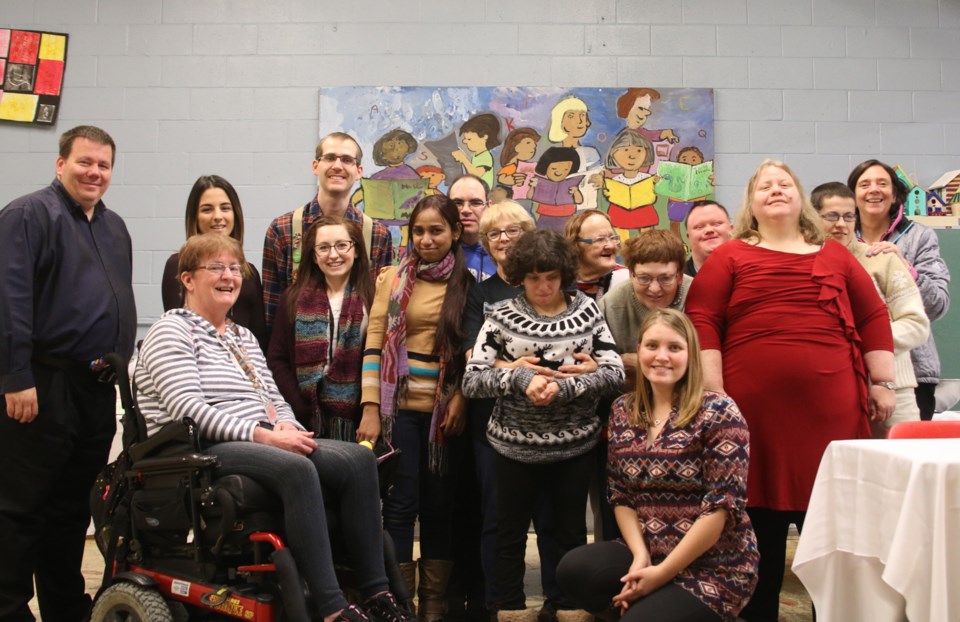 Staff and community members celebrate the March of Dimes 65th anniversary during an open house on Thursday.

THUNDER BAY - A well-known organization is celebrating more than six decades of providing community services to people in need across Canada.

The March of Dimes celebrated its 65th anniversary on Thursday and the Thunder Bay branch invited the community to a luncheon and open house to mark the milestone.

Regional development manager, Todd Kennedy, said the March of Dimes has undergone a lot of changes in its 65 years, but the underlying purpose has always been the same.

“The beginning of March of Dimes started out as fundraising for polio and the eradication of polio,” Kennedy said. “It’s really evolved many times over during the last 65 years in the areas of providing community services, clothing services, and services for persons living with disabilities in a wide sector of program development, community services, and community engagement.”

Kennedy has been involved with the March of Dimes for the past 17 years, and he said even in his time with the organization in Thunder Bay, much has changed, especially around areas of community engagement.

“We’ve had an opportunity to grow in areas like peer support groups, survivors of stroke, post-polio survivors, as well as the warehouse project here in Thunder Bay, which is a community drop in program for individuals to look into gardening, arts, health and wellness, and even employment,” he said.

The Warehouse Project provides people living with disabilities to build a social network and participate in programs and activities like woodworking, gardening, cooking, and community outings.

“It really helps individuals build friendships and build engagement in community activity,” Kennedy said. “Here it is like a little hub and allows folks to go from here and get connected with other community activities.”

Supporters, donors, funders, and members of the public all came out to show their support for the March of Dimes during the open house. Kennedy said it was a great showing of appreciation and he added that they are thankful for all the support they receive.

“Everything we do is completely reliant on our partnerships in the community,” he said.

As for what the next 65 years has in store for the March of Dimes, Kennedy believes that just like the last six and half decades have shown, it will continue to grow and evolve.

“I think we will continue to grow and develop our programming to meet the needs of those that we serve,” he said. “That’s the crux of it for sure.”