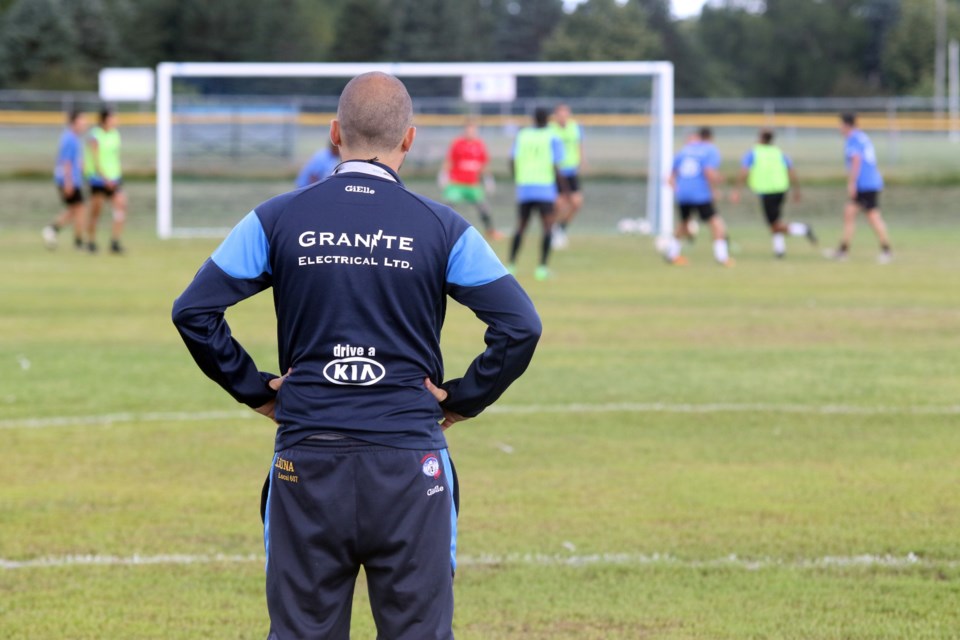 Chill head coach Giovanni Petraglia looks on at the team's last in-town practice before the PDL final on Saturday in Charlotte.

THUNDER BAY - The Thunder Bay Chill are one win away from the second league championship in franchise history.

After a shutout semi-final win against the FC Golden State Force at home this past weekend, the Chill will head to North Carolina with a clash against the Charlotte Eagles with the Premier Development League crown on the line.

“There’s so many similarities between this team and the [2008] team,” Swartzendruber said. “The fact that everybody gets along, everybody wants to die for each other on the field this year - it’s what carried us this year.”

The Chill won their first – and to date only – title in 2008 - which was the second summer Swartzendruber spent in Thunder Bay.

Now, in his sixth year with the team, he’s just 90 minutes away from recapturing that championship feeling.

“It’s the game you dream about playing growing up,” he said. “[We] got to take advantage of it.”

“The boys would like to play tonight,” Petraglia said. “They know this a big chance, maybe the last chance to bring a home a trophy for some.”

Swartzendruber is one of them. The 32-year-old says the championship match will likely be his last PDL game and going out as a winner would mean the world to him.

“It would allow me to move on and not have that nagging feeling inside me,” Swartzendruber said. “I fell in love with this club. This has been the best place I’ve played in my career.”

“Brandon scored 70 goals, and he has a chance to score the most important one,” Petraglia said. “Experienced players like him can help us - we’re going to go there thinking we can win.”

The Chill, who have yet to allow a goal through three postseason matches, are hoping to turn the motto that defense wins championships into a reality.

“We’re the best defence in the league,” Swartzendruber said. “It’s not just the back four or the keeper. It’s everybody working collectively.”

The squad hit the road on Wednesday with the title match scheduled for 3 p.m. in Charlotte on Saturday.