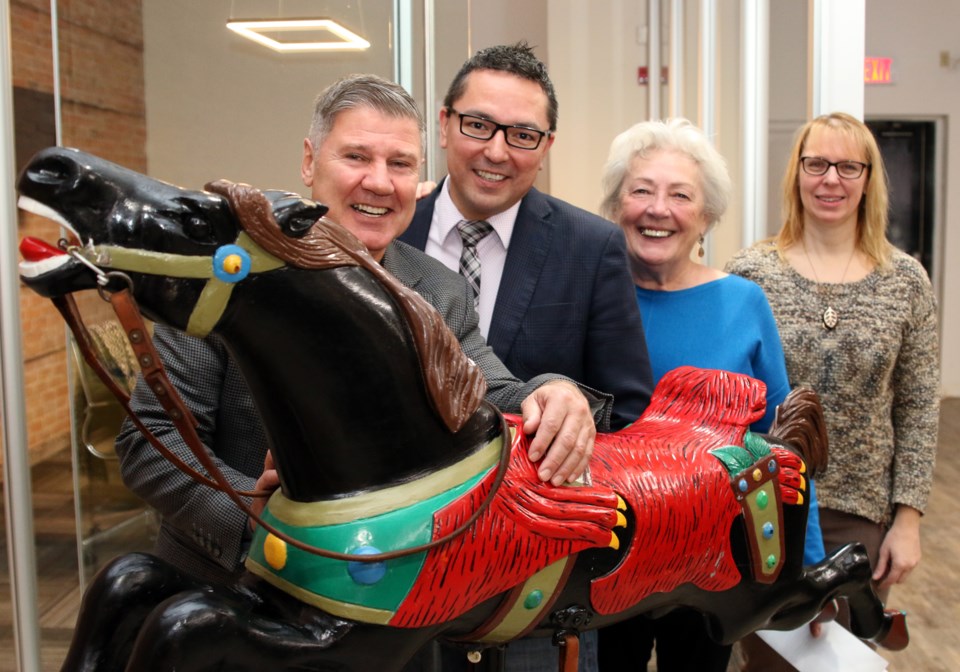 THUNDER BAY - The historic carousel at Chippewa Park is a rotation closer to being restored to its former glory with the help of funding from the federal and municipal governments.

The 100-year-old attraction received $300,000 in funding during an announcement on Saturday. Of that funding, $100,000 will come from the Federal Economic Development Initiative for Northern Ontario, with an additional $200,000 earmarked in the 2018 city of Thunder Bay budget.

“It feels great,” said Donna Gilhooly, co-chair of the carousel restoration committee. “We are on a role now. We are committed to raising enough money to completely restore the carousel and protect it for the enjoyment of future generations.”

The C.W. Parker carousel was built in 1915 and has been located at Chippewa Park since 1935 and is one of only three still operating in the world. According to Gilhooly, the carousel, which was designated as a heritage site by the city of Thunder Bay, will require approximately $1 million in funding to be completely restored.

The money announced on Saturday will allow the committee to begin work on restoring the horses, with 14 of the 28 horses undergoing restoration during the first phase. Additional work on the electrical and mechanical components will take place later.

“It’s a heritage structure, so we have to protect it, as well as conserve it,” Gilhooly said. “We can’t just strip it and paint it in any old way, or repair it in any old way. We want it to be restored as close to its original state as it was when we bought it in 1935.”

The $100,000 in funding from FedNor is part of the Canada 150 Community Infrastructure Program. MP Don Rusnak said it’s important for the federal government to invest in heritage projects that keep the history of the region alive.

“A lot of the credit has to be given to the Friends of Chippewa Park,” Rusnak continued. “They do amazing work and it’s an amazing asset that a lot of people in Thunder Bay and the region don’t know we have out there and we have to do a better job of promoting it.”

The city will be contributing $200,000 in the 2018 budget through parks and open spaces. Fundraising for the restoration project began six months ago and Gilhooly said an official fundraising campaign will be launched in January.

Gilhooly added that the carousel is not only rare, it’s a part of the community and the history of the region that needs to be preserved, so future generations can continue to enjoy it, just as their parents and grandparents have.

“I don’t think there is a kid that grew up here since the 1930s who hasn’t gone to Chippewa Park, had a favourite horse to ride on, and it was always exciting,” she said. “It’s part of who we are and you don’t want to throw away what’s important and rare in the community.”