A permanent, boarded asphalt surface, which could be used as an outdoor rink in winter, is the centerpiece of the city's plan for the site.
Mar 3, 2021 2:49 PM By: Leith Dunick 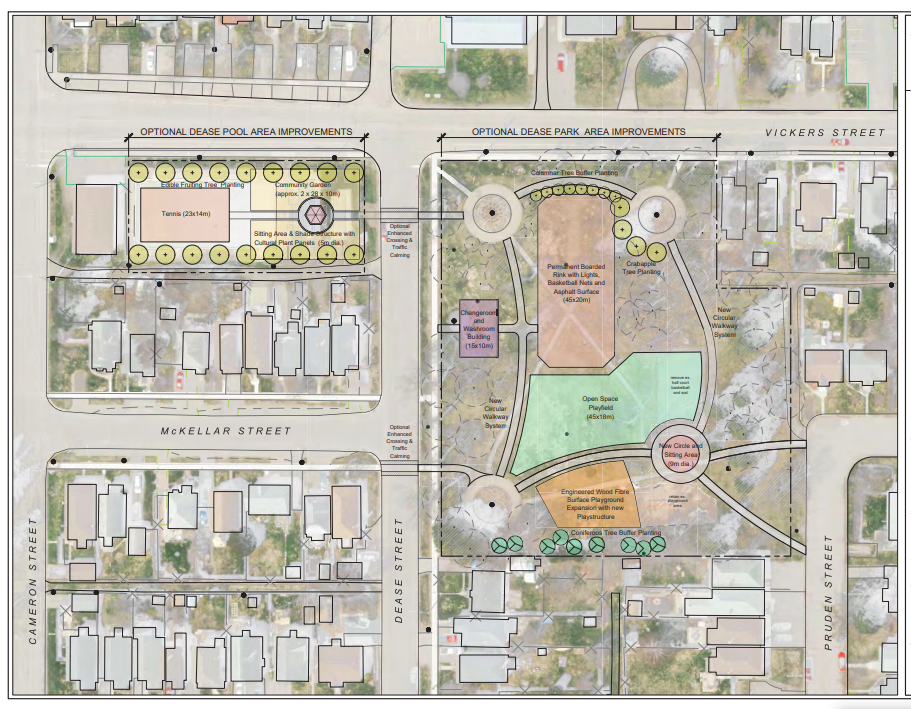 THUNDER BAY – The City of Thunder Bay plans to seek up to $250,000 in federal funding to help speed up the revitalization of Dease Park.

Council on Monday unanimously approved a recommendation to apply for the funding through the Canada Health Communities Initiative.

Kelly Robertson, general manager of community services for the city, said the city also has $253,000 earmarked in the budget to complete the project, which could include a permanent, paved and boarded surface that could be used as an outdoor rink in winter.

“But that type of park asset can be used year-round to do multiple kinds of activities and sports. So that was one of the key components that got strong community support for that part,” Robertson said in an interview on Wednesday with Thunder Bay Television.

“Other things in the proposed redevelopment plan ... with the new rink we would have to redo the walkways and then some of the amenities around park lighting to support the walkways. It creates a bigger green space within the park, that was well used during the programming that was done in the summer of 2019.”

Robertson added there are plans to enhance the play structure in the park and eventually, the city would like to construct an amenity building in the south side park.

The money will not be used to re-purpose the adjacent Dease Park Pool site. The pool, which was built in 1912, was demolished last September after being closed in 2019.

The city initially proposed re-purposing that site for pickleball or tennis courts, but later abandoned the plan when support wasn’t there. Administration is reconsidering its options for that site.

The CHCI is a 31-million fund put in place to help communities, Indigenous and non-profit organizations complete community projects, with a maximum funding limit of $250,000 per application.

Projects must be completed by June 2022, which suits the city’s timeline.

“We want to do construction this year,” said Robertson, adding if they expect to hear if the city’s application is successful by April 30.

The deadline to apply is Tuesday.

The city will also look at other potential projects and their eligibility under CHCI for a second round of funding, with a June 25 deadline.