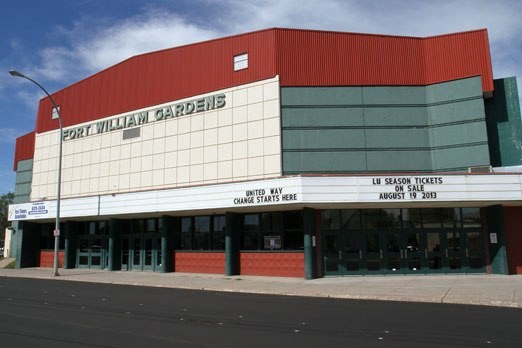 The city is hoping provincial, federal grants will cover the bulk of improvements to the Fort William Gardens. (File photo)

THUNDER BAY – The Fort William Gardens is one step closer to receiving over $1 million in upgrades, many of which are key to hosting the 2021 Scotties curling championship. The municipality has received approval to proceed to stage two of provincial and federal grant programs that city leaders hope will cover the bulk of the costs.

Applications to both the Northern Ontario Heritage Fund Corporation (NOHFC) and FedNor were approved to proceed to stage two of the grant process. If approved in full, the two grants would cover just over $850,000 over the estimated $1.1 million total, with the city picking up the remainder of around $250,000.

That price tag will cover a number of improvements at the Gardens and adjacent Fort William Curling Club. Those include ice deck flooring, a video scoreboard, a rigging system to suspend speakers, lighting, and cameras from the ceiling, digital screens, electrical and ice plant improvements, and upgrades to curling club washrooms.

Sport & Community Development Supervisor Paul Burke told councillors the city was obligated to provide some of those improvements under its agreement with Curling Canada to host next year's Scotties Tournament of Hearts, Canada’s annual women’s curling championship.

Burke pointed to the rigging and ice deck flooring, which will allow the curling club to be converted into a lounge and used for concerts, as particularly important aspects to have in place for the tournament. The curling competition itself will take place in the Gardens.

Given the aging facility’s uncertain future, Coun. Aldo Ruberto questioned how much of the investment would retain value if the city sold or rebuilt the Gardens. The ice deck, video screens, and perhaps the digital scoreboard could be moved to a new facility, Burke said.

Coun. Andrew Foulds said it would be money well spent, expressing hope the Scotties tournament, scheduled for February 2021, could help buoy both the city’s economy and its spirits as it emerges from the COVID-19 pandemic.

“Thunder Bay is a sports town,” he said. “Sporting events like this bring people together, they bring people joy. Something like this – it was important before, and I can’t help but think it might even be more important now.”

The city’s contribution to the project, estimated at $251,700, has already been allocated in the 2019 and 2020 capital budgets. City administration told councillors they don’t anticipate the city’s share of costs going up, and that if full grant funds were not received, the scope of the project would be adjusted to compensate.