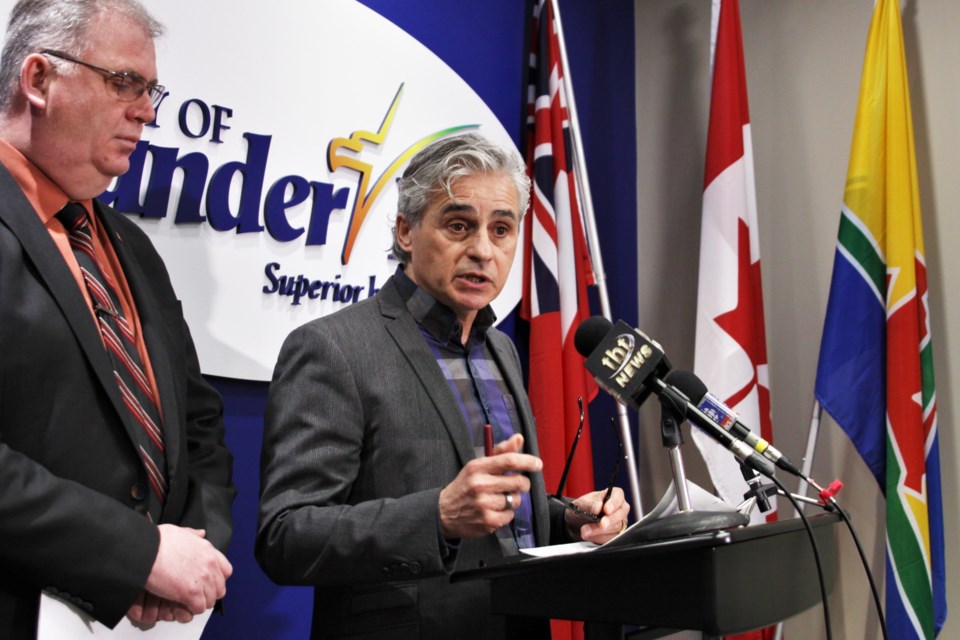 Mayor Bill Mauro is calling on the province for more support in securing PPE for frontline workers. (File photo)

THUNDER BAY – The City of Thunder Bay says it has enough personal protective equipment (PPE) to protect frontline workers from COVID-19 – for now, at least. But concerns over that supply remain, with Mayor Bill Mauro looking to the province for additional support.

Mauro sought city council’s backing earlier this week in lobbying for action from the provincial government to ensure municipal workers have adequate protection.

An emergency PPE supply managed by the province is available to cities in case of shortages, but non-health workers such as police officers, firefighters, and water and sewer workers are not currently eligible for that backup supply. A resolution passed unanimously by city council urges the province to reconsider that.

“The priority distribution list focuses on health care and paramedic services,” it reads in part. “Fire, Police and Water and Waste Water are critical services that deal with vulnerable populations or are put in positions where the tasks they undertake require the use of PPE.”

For city waste water workers, that can include the need for N95 masks to protect from biological pathogens in sewage.

Dan Munshaw, manager of supply management for the city, said his department has scrambled to keep up as governments around the world compete for limited supplies.

“It’s the wild west of procurement,” said Munshaw. “The last six weeks have just been wild.”

Municipalities can access the provincial’s emergency supply only when their own stores are down to 14 days’ worth of inventory or less, Munshaw explained. Thunder Bay has not yet needed to take that step.

“At this point, we haven’t had to tap into that emergency supply chain,” he said. “We’re actually building inventory in most emergency pandemic commodities, so we’re in reasonable shape.”

Some items remain a challenge to find, though, like N95 face masks manufactured by 3M, which Munshaw called “the holy grail of pandemic PPE procurement.”

Munshaw credited local companies with stepping up to aid the city in supplying frontline workers. Several have pivoted to produce items like sanitizer, while others leveraged supply networks to help the city meet its needs.

“We are seeing some amazing things being done by local suppliers,” he said. “They’ve stepped up to the table, they’ve broadened their product lines, they’ve been creative in obtaining supply for us.”

Munshaw echoed the mayor’s concerns about the restrictions to what kinds of workers can access PPE from the provincial emergency supply, which is limited to those in long-term care, acute care, and a limited number of other health fields.

“The majority of the city’s needs fall outside of that,” he stated.

Outside of that emergency supply, cities are mostly left to fend for themselves.

“There isn’t a cohesive and coordinated effort provincially for pandemic supplies, outside of the provincial emergency [supply] for acute and long-term care,” Munshaw said.

City manager Norm Gale affirmed that city workers, including paramedics with Superior North EMS, workers at Pioneer Ridge long-term care home, police officers, and firefighters, have had access to the equipment they require to this point.

“We’re making sure that anyone who’s in a situation where there’s a risk of coming into close contact, we supply with appropriate PPE,” he said.

Gale would not comment on how much it has cost the city to secure those supplies so far, but said the city would be releasing a report in the coming weeks that would clarify how the COVID-19 pandemic has impacted its finances.