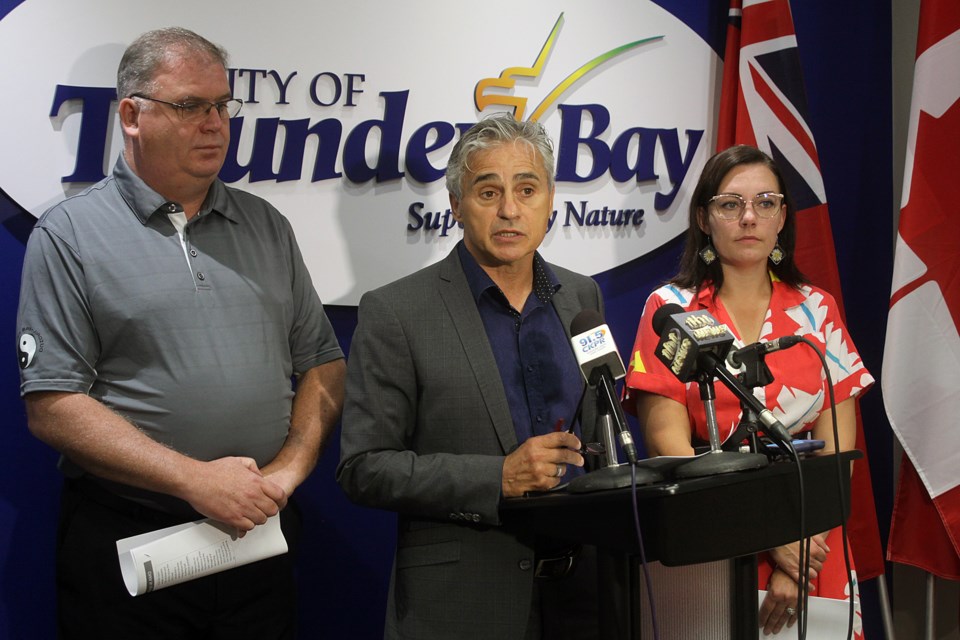 Thunder Bay mayor Bill Mauro, while joined by city manager Norm Gale and Coun. Shelby Ch'ng (Northwood), speaks at a news conference about their trip to the Association of Municipalities of Ontario annual conference on Thursday, August 22, 2019. (Matt Vis, tbnewswatch.com)

Thunder Bay city officials earlier this week travelled to Ottawa for the annual Association of Municipalities Ontario annual conference, where they met with three provincial ministers and discussed a number of local priorities.

Ford on Monday pledged that the structure of the Ontario Municipal Partnership Fund, a key provincial funding source relied upon by cities and towns across Ontario, would be unchanged in 2020, though a subsequent meeting with Finance Minister Rod Phillips didn’t provide a guarantee that the city would receive the same amount of money.

“It was a bit odd, I think, and a bit surprising for all of us to see at a municipal conference where you would confirm that for the 2020 budget those cuts were actually going to go forward and be implemented, perhaps they felt they were doing us a bit of a favour and giving us time to plan,” Thunder Bay mayor Bill Mauro said at a Thursday morning news conference.

Thunder Bay received a $19.3 million allocation from Ontario Municipal Partnership Fund in 2019, a reduction of more than $1 million from the previous year.

Mauro said the city’s side of the table during the Tuesday morning meeting with Phillips pointed out that decrease, emphasizing that the funding represents eight per cent of the city’s revenue.

The premier also announced that transitional funding would be available next year as the public health cost sharing formula shifts, with the province lowering its responsibility for 70 per cent from the previous 75 per cent.

But details about how much funding will be available and how it will be distributed are scare.

“I think it’s fair to say we don’t have any sense of what it means,” Mauro said.

Mauro said the reduction of about 25 per cent in provincial grant funding received by the Thunder Bay Police Service, along with increased costs from the Office of the Independent Police Review Director, have left city emergency services that are overwhelmed and struggling to meet demand needing more but getting less from the province.

“As mayor, I feel I have a duty of care to the people of this city and we’re not sure we have the capacity to meet that right now,” Mauro said.

“We were very strenuous, clear and unequivocal in our comments to (Jones) that we need (her) help. Either we’re going to get that help or we’re going to have to find some capacity either shuffling funds around or within the tax base to try to meet that need.”

Mauro, who refused to characterize the government’s response, said there were no commitments to provide assistance.

The delegation also had a meeting with a senior official in the ministry of infrastructure and an unofficial sit down with Transportation Minister Caroline Mulroney to discuss the future of the city’s Bombardier plant.

Mauro said he’s hopeful there will be an announcement soon about the potential for a 36-car Metrolinx order and spoke to Mulroney about whether a separate 60-car option on a previous light rail vehicle contract can be triggered.

“There are negotiations ongoing and hopefully if those conclude in a positive way, it is still shorter term. There is still a longer term situation we need to solve,” Mauro said.