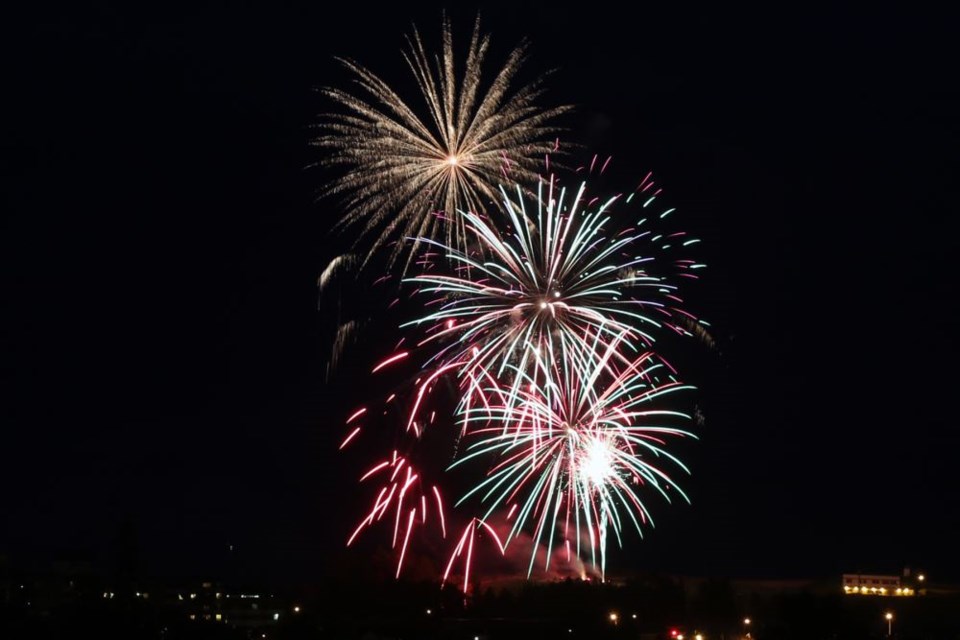 A city report recommends significantly cutting the number of days on which fireworks can be set off. (Leith Dunick, TBNewswatch/FILE)

THUNDER BAY – Rules restricting the use of fireworks could be tightened significantly in Thunder Bay, if city council approves a set of recommendations aimed at tackling noise and nuisance concerns.

A report from licensing and enforcement manager Doug Vincent recommends replacing the current fireworks bylaw, written in 1993, with a new set of rules that would bring Thunder Bay more in line with counterparts across the province.

If approved, the changes would slash the number of occasions on which fireworks can be set off from seven to three days a year – Canada Day, the civic holiday in August, and New Year’s Eve.

Fireworks would be permitted from dusk of the preceding day until 12:30 a.m. the following day for each occasion, reduced from current rules allowing fireworks on the three days before each occasion.

That would effectively cut the number of calendar days on which fireworks are allowed from 25 to 6 per year.

Other recognized religious or cultural days could be authorized on an individual basis through a new application process.

Penalties would also be raised for first offences, with a sliding scale for repeat offenders. Provincial rules allow fines of up to $500 for a first offence, said Vincent.

If the report is okayed by council Monday, administration will be directed to develop a new bylaw for council’s approval by Oct. 31.

Council can also accept some recommendations and reject or modify others, Vincent noted.

“We’ve proposed a starting point for council’s consideration,” he said.

Administration’s recommendations would largely address those concerns, Ruberto said Friday, particularly by removing the three-day period in which fireworks are allowed before each holiday.

“We’re following what other cities are doing, and I think it makes sense,” he said. “The whole premise of this is people were going all night, all day. It had a big effect on animals, traumatizing people’s pets.”

Fireworks also affect some people with Post-Traumatic Stress Disorder (PTSD), he said, and in some cases have landed on homes or garages, causing damage or even fires.

Thunder Bay allows fireworks on far more days than most of the 22 municipalities examined for the report, said Vincent.

By comparison, none of the larger Ontario cities examined in the report permitted more than four days, Vincent said.

“Looking across the province, most larger centres either had two (Canada Day and Victoria Day) or added New Year’s Eve,” he said. “A lot of centres [also] had a religious holiday recognized, [such as] Diwali day.”

The city consulted with local fireworks vendors, as well as other industry stakeholders, in developing the new recommendations.

Suppliers said reducing the number of permitted days would have a negative impact on sales, the report notes.

The city looks to minimize that impact by eliminating days identified as least profitable, such as Victoria Day and Labour Day, and retaining the most popular.

When it comes to enforcement, the report recommends making property owners, or named tenants, responsible for bylaw violations on their property.

“The people at the party aren’t going to report whoever actually set them off,” said Vincent. “Unless you have a witness willing to come forward… we have no way of dealing with an individual. It just puts the responsibility back on the property owner to make sure they’re following the rules.”

That recommendation drew concern from Ruberto, who said penalties should target only those who directly broke the rules.

“You don’t punish people who are not responsible,” he said

Otherwise, Ruberto said a fine of up to $500 is reasonable, as long as the penalties are accompanied by a robust education campaign and primarily target willful disregard of the rules.

“We need an education campaign obviously, but there are people who go around doing whatever they want – they don’t care about the impact to their neighbours,” he said.

Other recommendations in the report would extend authorized fireworks sale days from six to seven business days before each permitted day; allow an “alternative weather day” the next day to the authorized day only; and provide an additional “discharge-only” date for Canada Day, when the holiday doesn’t fall on a Saturday or Sunday.