City council decides to hold off on committing Ontario Commuter Cycling Challenge dollars to other projects, instead waiting to determine feasibility of new bridge.
0
Jul 23, 2019 1:37 PM By: Matt Vis 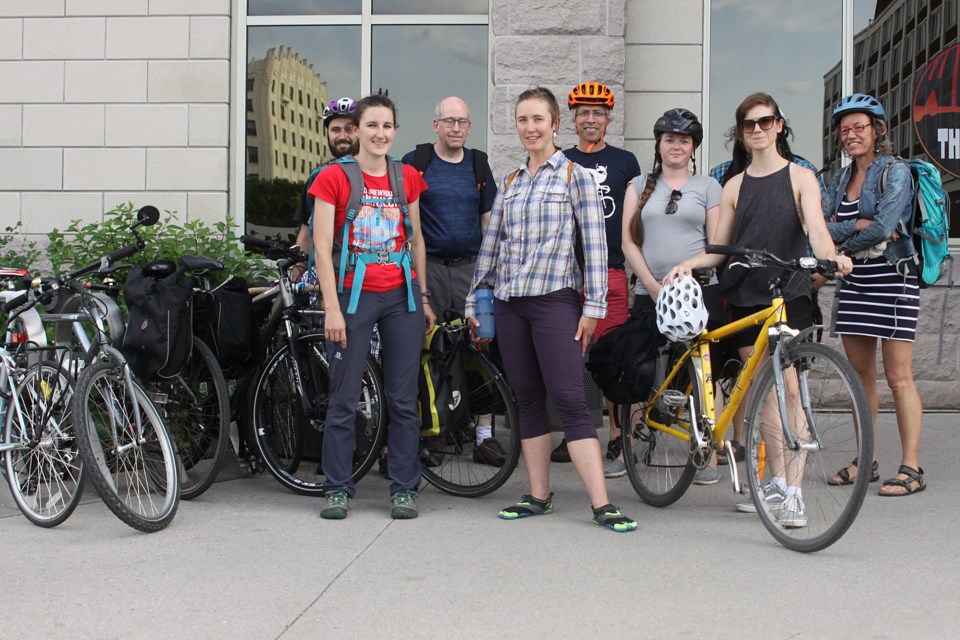 A group of local cyclists rode from the Neebing-McIntyre Floodway to Thunder Bay city hall for the city council meeting on Monday, July 22, 2019 to show support for an active transportation bridge connecting the Carrick and Vickers corridor. (Matt Vis, tbnewswatch.com)

THUNDER BAY – A new span that has been identified as a key link to connecting a north-south cycling corridor remains on the table, despite the option for a more cost-effective solution being ruled out.

After CN Rail late last week informed the city that the railway would not allow its existing crossing to be retrofitted, Thunder Bay city council on Monday night voted to move ahead with planning for a new pedestrian and cycling bridge across the Neebing-McIntyre Floodway.

The city’s long-term active transportation plans have identified connecting the Carrick and Vickers route with a bridge across the Floodway as a priority, providing cyclists an alternative to Memorial Avenue. The project was the top item on the city’s wish list for Ontario Commuter Cycling Challenge funding, a program initiated by the former Liberal government using proceeds from its cap and trade system that has been since cancelled.

While a new bridge was initially under consideration, city administration pivoted to negotiating with CN to share the nearby rail bridge when cost estimates for a separate structure exceeded the available funding.

A group of local cyclists rode from the waterway to Thunder Bay city hall to show their support for a bridge. Cycling advocates Michael Sobota and Ken Shields gave a deputation urging council to support a standalone bridge.

“No other single project would do more to actively connect people from north and south, other than the Memorial Link,” Sobota said.

The city has $1 million available, including its required 20 per cent matching funds, but that falls short of the projected price tag.

Kayla Dixon, the city’s director of engineering and operations, said a new span would likely cost at least $1.4 million, especially when including the trail approaches to the bridge.

With the clock ticking to spend the funding envelope, administration recommended proceeding with new off-road trail extensions on Oliver Road from Balmoral Street to Golf Links Road, and on Ford Street from Moodie Street to Walnut Street and remaining funding being put to design studies for the bridge.

Dixon said that all three are priorities and need to be done in the short-term.

Council instead decided to commit just to the detailed design studies for the new bridge, with subsequent decisions to come during next year’s budget deliberation process.

TTC examines expediting an order for more streetcars
Jan 28, 2020 5:12 PM
Comments
We welcome your feedback and encourage you to share your thoughts on this story. We ask that you be respectful of others and their points of view, refrain from personal attacks and stay on topic. To learn about our commenting policies and how we moderate, please read our Community Guidelines.