THUNDER BAY – The city has a rich transportation history. For the next year, that history will be visible as it plays a prominent role on Thunder Bay Transit’s art bus, which is sporting a decorative wrap designed by local artists.
Jul 24, 2015 3:00 PM By: TbNewsWatch.com Staff 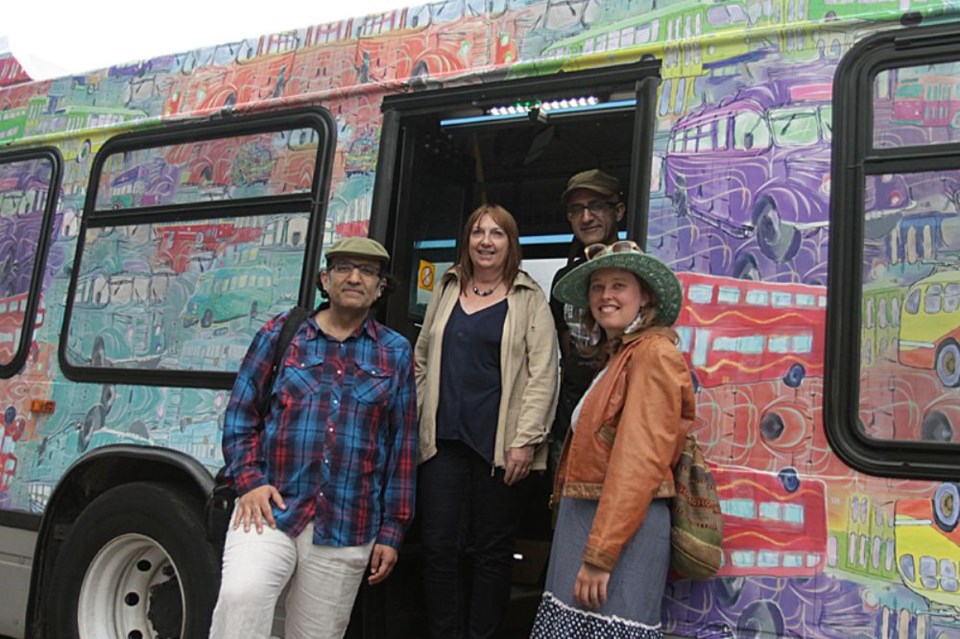 THUNDER BAY – The city has a rich transportation history.

For the next year, that history will be visible as it plays a prominent role on Thunder Bay Transit’s art bus, which is sporting a decorative wrap designed by local artists.


“For me, it’s a celebration of our transit heritage. There are a lot of references to historical vehicles built here in town that were used for transit or transit vehicles that were used in the city,” said Daniel Hansen, chair of the city’s public art committee.

The art bus, which was designed by a team from the Satellite Studio Artist Collective after a call for submissions earlier this year, was officially unveiled outside city hall on Friday afternoon.

The exterior of the bus, called “Relection and Movement” features a bright and colourful wrap that will remain for a year while the interior panels on the bus currently in place were created by the Community Arts and Heritage Project but will be changed.

Carol Kajorinne, one of the four artists of the Satellite Studio Artist Collective,

“For people that don’t go to the galleries and seek it out, the art will find them and they’ll appreciate it,” she said. “Even when we were on the bus I liked seeing people go by and you could read their mouths and no matter who it was they all really liked it.”

The bus will be rotated through all of the routes throughout the city, allowing people in all areas an opportunity to see it. The bus will also be used as a shuttle for major city events.

The fact it’s on wheels makes the bus different from the rest of the city’s public art.

“When you’re doing art installations they almost have to be stationary, not necessarily statues but they can be integrated artwork or projections,” Hansen said.

“This is really unique that it can move around and everybody will have an opportunity to see it.”

The money for the project came from the city’s allocation to the Clean, Green and Beautiful committee, which set aside $20,000 for new and innovative ideas.

While the exact cost is not known, city officials said the total came under the $20,000 budget.

Coun. Rebecca Johnson, who is the chair of the city’s Clean, Green and Beautiful committee, said it’s important to showcase the unique culture in Thunder Bay to present its identity.

“We know we have a number of excellent numbers in a variety of mediums in our community,” she said. “Hopefully by showing them around the city more artists will come forward and want to have their art on the bus.”