Thunder Bay expected to have capacity for 400 evacuees through provincially coordinated effort by next week, though there already hundreds of people who have arrived outside that process.
Jul 10, 2019 3:21 PM By: Matt Vis 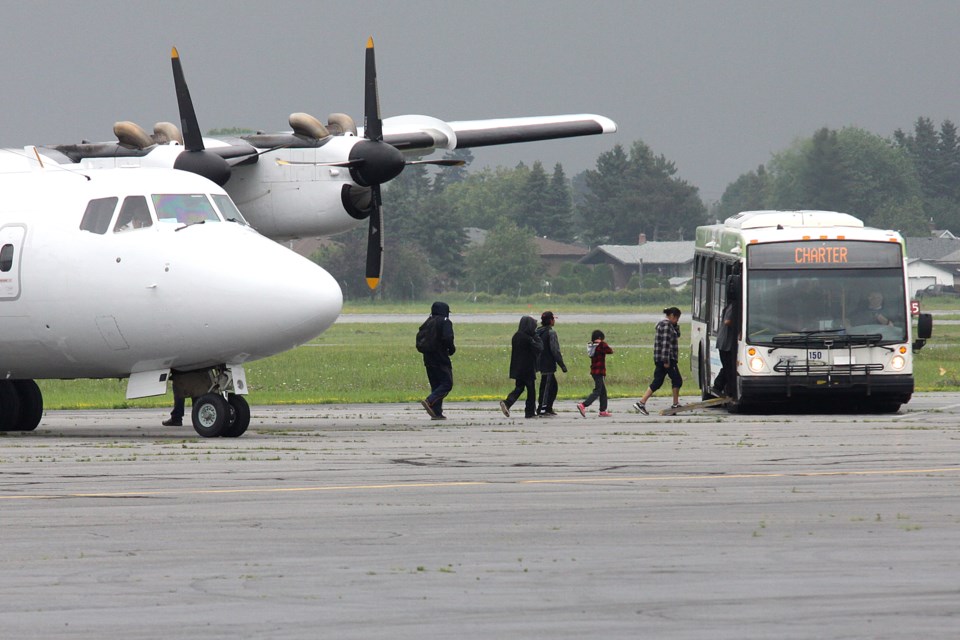 THUNDER BAY – With fierce forest fires forcing an evacuation of Pikangikum First Nation for the second time this year, up to 400 people from the community are expected to make their way to Thunder Bay through provincially coordinated evacuation efforts.

“The current situation is dire and there are people under threat from forest fires and smoke. Our capacity to help these people is constrained and we are stretched beyond capacity today,” said Thunder Bay city manager Norm Gale at a Wednesday morning news conference.

“We believe the situation will get worse before it gets better.”

The latest wildfire – Red Lake 39 – has grown to 50,000 hectares and is burning six kilometres southwest of the community. Smoke from the blaze forced the evacuation of vulnerable community members last week before a full evacuation began on Monday.

A Ministry of Natural Resources and Forestry spokesperson on Tuesday night said sprinklers have been installed around the southwestern areas of Pikangikum. Recent rain, that was heavy at times, has helped limit fire behaviour and allow for more suppression efforts to take place.

One of the major limitations to Thunder Bay being able to host evacuees has been the local availability of hotel rooms.

“That setting for them is best in a hotel,” Hay said.

In addition to those evacuees arriving through provincially coordinated efforts, Gale said there are an additional 600 people mainly from Pikangikum who left the community on their own and came to Thunder Bay.

"Those people we are not providing support to but those people will demand and require services as well," Gale said, adding the city's evacuation response does not arrange for accommodations and food for those outside the coordinated process. "This leads to our challenge, which is making sure people get the help they need."

Local emergency services are preparing for a potential influx in call volume to meet their needs.

“When you’re adding residents or new people into our community we want to ensure they’re safe and that we have the resources to deal with the possibly increasing calls for service,” city police chief Sylvie Hauth said.

“We will probably have to look at additional resources to ensure that if that increases there we can respond effectively not just to local residents day-to-day 911 calls but any additional calls that come through to us.”

This is the second time in less than two months that a wildfire has advanced to within kilometres of Pikangikum, forcing people to be displaced. The community, which was blanketed by heavy smoke, had declared a state of emergency on May 30. More than 1,600 people were evacuated, including nearly 400 who were hosted in Thunder Bay.

As well, Keewaywin First Nation was completely evacuated last month as a massive wildfire roared to within eight kilometres of the community, with residents sent to Sioux Lookout and Timmins.

Earlier this week, Ontario solicitor general Sylvia Jones said she had been reaching out to mayors across the province to encourage their communities to host evacuees.

Brent Ross, spokesman for the Ministry of the Solicitor General, said people from Pikangikum are also being flown to Hearst and Kapuskasing.

“Post this situation we’re in right now, we’re going to have to work with them to ensure in the future there is something in place where if host communities are not stepping up to be part of this solution, then the province and the federal government need to take more of a leadership role in making sure we don’t find ourselves in this position in the future,” Mauro said.

Ross said several other Northern Ontario communities could be impacted in the coming days and weeks.

"There is an urgent need for host communities to provide a safe haven for evacuees during this difficult time. In partnership with our provincial, First Nations, federal and (non-governmental association) partners, the ministry is coordinating a contingency plan should we need to proceed with a large-scale evacuation," Ross said in a written statement.

The latest influx will be the third significant evacuation hosting for Thunder Bay, following the arrival of people from the flood-threatened Kashechewan First Nation in mid-May followed by the first Pikangikum evacuation a few weeks later.

Thunder Bay had declared an emergency for hosting purposes on May 18, which has remained in effect through the subsequent evacuations.