Colorectal cancer screening gets a boost 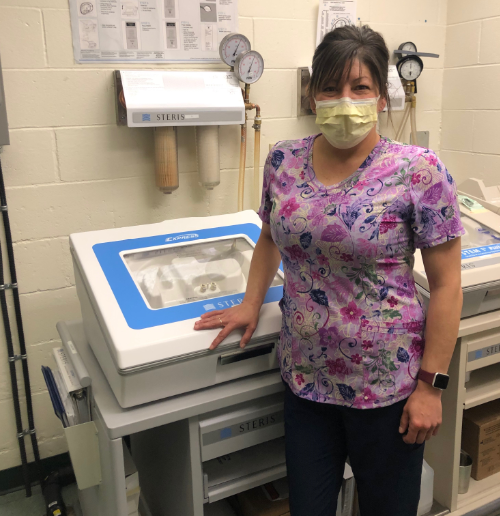 NEWS RELEASE
THUNDER BAY REGIONAL HEALTH SCIENCES FOUNDATION
***************************************
MARATHON, Ont. -- Anyone who has prepped for an endoscopy procedure knows it’s not something you want to do often; and you certainly don’t wish to have your procedure cancelled due to an equipment failure. In order to keep its endoscopy program running smoothly, Wilson Memorial General Hospital recently received a grant of $34,469 to purchase a new Endoscopy Reprocessor; equipment used to disinfect endoscopes quickly and effectively between procedures. The grant was provided thanks to the generosity of donors to the Northern Cancer Fund.
At Wilson Memorial General Hospital, screening for colorectal cancer, using colonoscopes, has been available to residents of Marathon and surrounding areas since 2008. Local access to screening is important as many colorectal cancers can be prevented through regular screening as precancerous polyps can be removed before turning into cancer.
“Our current reprocessor is 11 years old and was starting to fail intermittently,” said Janet Gobeil, Chief Nursing Officer, Wilson Memorial General Hospital. “We do approximately 15 scopes a day, with two days set aside per month for the cancer screening program.”
Continued Gobeil, “We have surgeons who travel to Marathon from Thunder Bay to perform the scopes. If the reprocessor fails, it not only means that our patients can’t have their procedure completed, but it’s also a huge inconvenience to the surgeons. We’re very grateful that this grant was awarded to us and that we now have access to two reprocessors. Offering colorectal cancer screening close to home is essential as it removes the burden of travel for this important procedure.”
“Northwestern Ontario is a vast region, and access to local cancer care can be challenging,” said Glenn Craig, President & CEO, Thunder Bay Regional Health Sciences Foundation. “Donors to the Northern Cancer Fund provide support for exceptional cancer care in multiple cities across the region, keeping care as close to home as possible. Back in 2007, $115,000 was granted to start up the colorectal cancer screening program at Wilson Memorial General Hospital and we’re delighted to contribute to the ongoing success of the program, where hundreds of people are screened each year.”