Former Monty Python star takes aim at the rich and powerful in his one-man show that stopped Friday night at the Thunder Bay Community Auditorium.
Nov 8, 2019 11:00 PM By: Leith Dunick 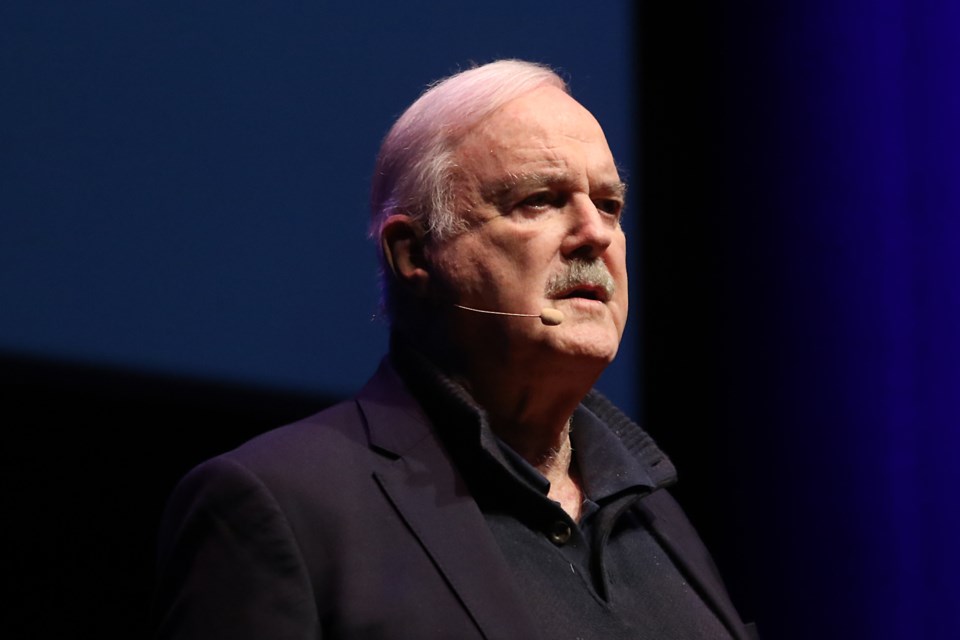 THUNDER BAY – John Cleese says he’s smart enough to know he doesn’t know as much as he thinks he knows about the ways of the world.

But he does know comedy.

After all, he did help found Monty Python, created Fawlty Towers and starred in A Fish Called Wanda and Life of Brian, two of the greatest silver screen comedies of all time.

Cleese, who celebrated his 80th birthday on Oct. 27, is still as funny as ever – although he’s given up silly walks, hotel management and leading the People’s Front of Judea (or was it the Popular Front?), in favour of a more academic take on the world.

The legendary comic brought his one-man show, Why There is No Hope, to the Thunder Bay Community Auditorium on Friday night, discussing why a lust for power and money has given rise to the likes of U.S. President Donald Trump, his love of lemurs and retelling the tale of how Eric Idle convinced George Harrison of the Beatles to cover the production cost of Life of Brian.

During a question-and-answer session that closed out his 90-minute set, Cleese, who has been married four times, was asked if he could do it all over again, would he change anything, did he have any regrets?

“Oh yes, I have two. I would not have made Fierce Creatures in the way that I did, because people thought it would be like Wanda, because I used the same cast and it was intended to be a completely different (film),” Cleese said.

“And I would not have gotten married the third time, because she very much wanted to get married and I didn’t. And in the end I thought it matters so much to her and it doesn’t matter to me and I got married and that cost me $20 million.”

It did work out for the 1,200 or so who turned up to see him at the Auditorium on a snowy fall evening.

“For the last 10 years I’d have much preferred to have been writing, but I’ve had to be performing, just to pay the losses … It’s not that I don’t have fun, but do you think I’m going to come to fucking Thunder Bay?”

In true Cleese fashion, no one was off limits.

He took shots at the BBC, scientists and stupid people, and even railed against the Puritans.

“They said Christmas pudding was idolatrous. Meanwhile, there was the greatest persecution of witches, that there’s even been in British history,” he said. “How do you put the two together? The men, who were in charge, would have naughty sexual thoughts and they’d think, ‘Well, they can’t be my thoughts. They must be put in my head by them.”

He called Trump stupid (and said he’s not sure why some voters didn’t see Canada’s Justin Trudeau as fit to govern).

And while he’s long past performing the skits that made him famous, he wasn’t above talking about them, regaling the audience with a tale of fellow Python Michael Palin cracking him up on tour while doing the dead parrot sketch, to the point he lost his place.

“I said to the audience, ‘What’s the next line?’ And about 400 of them shouted the next line. I said, ‘What is the fucking point? You know the script better than I do … So for the rest of the sketch, Michael did his lines and I conducted the audience.”

A better comedic conductor would be hard to find.