THUNDER BAY -- Nick Mulder would like to see less provincial and federal government and more community and corporate involvement as Ring of Fire development moves forward.
Jul 10, 2014 11:40 AM By: Leith Dunick 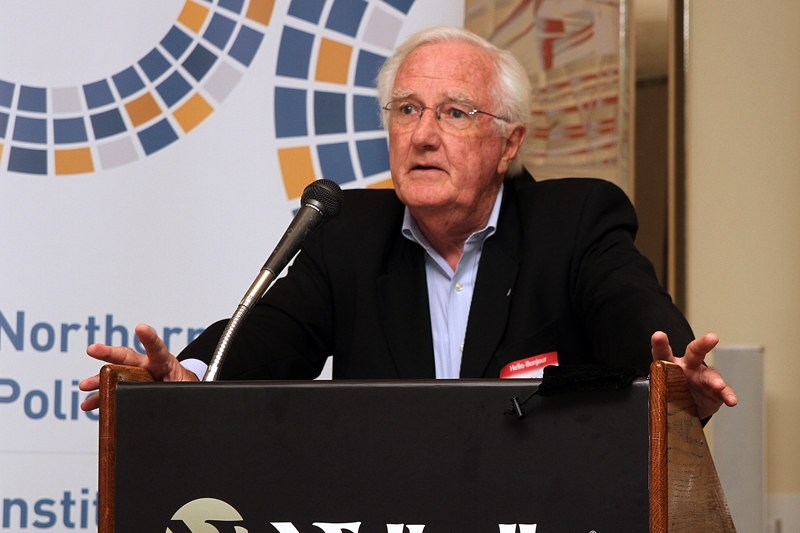 THUNDER BAY -- Nick Mulder would like to see less provincial and federal government and more community and corporate involvement as Ring of Fire development moves forward.

Mulder, who helped create the country’s airport and port authority model, said an arm’s length body based on that set-up is the best way to finalize plans for roads, railroads and other infrastructure needed to make the development a reality.

“It allows the local people, the local interests to make most of the final decisions without having the federal or provincial governments involved,” said Mulder, who delivered highlights of his paper Thursday morning to an audience of industry, business and municipal leaders.

“You’d set up an authority with representatives and a board of directors to represent all of the people in the community. They make the decisions as to what the priorities are, what the investment plans ought to be, how to finance it, how to manage it and so on.”

Governments shouldn’t be in the business of mine development and instead focus on other priorities, letting the stakeholders have the final say.

As someone who has served as a deputy minister at Transport Canada and dealt with Crown corporations, too much bureaucracy and political involvement doesn’t often lead to success, he said, pointing to Air Canada as an example.

“They have to approve all the plans, they have to raise all the money. Government being involved in those kinds of things is passé. You should let local communities, the business sector and in this case, the Aboriginal communities, make all the decisions.”

Northern Development and Mines Minister Michael Gravelle said he spoke to Mulder on Wednesday and made it clear the province has no idea what the finalized development corporation’s structure will actually look like.

It may not be a Crown corporation at all, he said.

“The fact is, we have not made a decision on what is the best model to move forward for the development corporation,” said Gravelle, whose government has already set aside $1 billion to cover a portion of the infrastructure costs in the Ring of Fire.

“What we’re keen on is to bring in the important partners in the project.”

That would include industry, First Nations and both the provincial and federal governments.

“We think ultimately that is the best model moving forward,” Gravelle said.

Mulder said while government contributions are nice, they come with caveats, and there are other examples across the country, including Newfoundland and Labrador’s Voisey’s Bay mine, where government involvement was limited and the private sector raised 90 per cent of the infrastructure money.

The risk is thus transferred to the private sector, he said, noting the British Columbia government once spent $300 million building a rail line to entice mining companies that never came.

Mulder stressed the socio-economic issues facing those same Aboriginal communities are not part of his authority model plan. Those should be solved by outside agencies and within the First Nations themselves, and are a separate issue.

Nishnawbe Aski Nation’s Dean Cromarty said his people certainly want a say in how the Ring of Fire unfolds.

“NAN has not taken a formal position on any of this. We have a lot of work to do before we can finalize any concept.”

Thunder Bay Mayor Keith Hobbs listened intently, and said there was a lot to like about the plan as presented.

“Who’s going to run this development corporation is a huge issue,” he said.
But whatever it looks like, it needs to get moving, Hobbs added.

“We’ve done enough talking now. We’ve got to get this development corporation formed and the airport and port authority model is a good model. We’ll see what the provincial government has to say about it.”