Fearing legal ramifications, city council chose to defer a proposed resolution calling for a report on Horizon Wind Inc.’s revised plan for 18 wind turbines on the Nor’Wester Mountains.
Apr 14, 2010 2:08 AM By: Leith Dunick 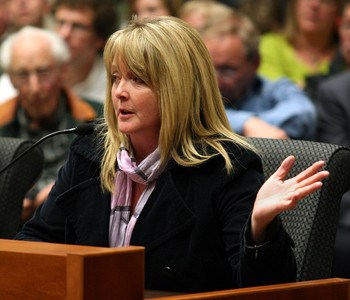 The report, solely to give council information to vote for or against the location of the turbines, was originally scheduled to be delivered on May 17.

Council was facing a chicken-or-egg scenario at Tuesday’s special committee of the whole meeting, which saw deputations from 20 residents and Horizon president Anthony Zwig, who presented a revised plan that would see six turbines moved back 600 metres, setting up a minimum 1.1-kilometre buffer zone between the industrial power generators and the nearest homes.

On the one hand, they could have requested the report be delivered as planned, but without having seen Horizon’s provincially mandated renewable energy approval, many councillors felt they wouldn’t have the necessary knowledge to make a proper decision.

“I feel I have the obligation to get as much information as I can to make sure that all the questions I need answered are answered,” said Mayor Lynn Peterson following the six-hour meeting, rationalizing the decision to wait until city solicitor Rosalie Evans was available to provide legal advice.

Because of the provincial Green Energy Act, the city has little power over the $75-million project, which is planned for 17,000 acres of city-owned land that technically lies in Neebing.

All the city really can do is give final approval of the location of the turbines. The provincial REA will address the rest, including most of the concerns brought forth by the public on Tuesday night. Still, the city doesn’t want to rush into anything to hastily, said the man who chaired the meeting.

“We need to have as much information in front of us as possible to make a decision we can stand by,” said Northwood Coun. Mark Bentz.

Horizon had asked the city to produce its report before it releases the REA next month, mainly for financial reasons, said development manager Mark Smith.

“It’s my understanding that the analysis undertaken is very specific for the location that’s being proposed. If the locations aren’t considered appropriate by council, Horizon would then have to find other locations and again evaluate the appropriateness of those locations, undertake research and then do a report and go back and redo the process,” Smith said.

That did not sit well with McKellar Coun. Robert Tuchenhagen, who said the process could get expensive for the company.

“That isn’t fair in my opinion. We have a very narrow scope of things to decide with respect of the whole operations. And I think we have the ability to decide that now and to be fair to the whole process,” said Tuchenhagen, opposing the deferral and calling for the city’s report to be handed down on schedule.

Zwig, hours before the decision was made, said he remained confident the city would stick with the original terms of the lease, which is expected to pay the city between $200,000 and $300,000 a year. Though he didn’t rule out legal action if the city does eventually renege on the deal, he said he’s confident Thunder Bay will do the right thing.

“I’m an optimist and I think the benefits are so clear here for the city, and indeed for the region, that I fully expect the city to ratify the agreement and support us,” said Zwig, who late last week said his company had made all the concessions it could afford to make and said provincial regulations that only require a 500-metre buffer zone were on his side.

Zwig said Horizon is trying to be a good corporate citizen by listening to concerns and reacting accordingly, but he realizes opposition groups like the Nor’Wester Mountain Escarpment Protection Committee have their own agenda, one that doesn’t mirror the needs of his company.

“When the Nor’Westers first started talking about this, they were yelling that the turbines should be two kilometres away from the homes. Now we’ve moved the turbines two kilometres from almost all the homes and they’re still complaining. But we think that’s a significant move. It has a significant impact on us, on our bottom line. But the councillors are all smart people and I think they’ll understand that and recognize it and support us.”

NMEPC’s Margot Freitag once again called for an independent study to determine the effects of turbines on people’s health. That’s the least council should do, she said in presenting her argument.

“You, as elected representatives, must not put us in harm’s way for financial gain,” Freitag cautioned council.

Barbara Ashbee-Lormand, who abandoned her Shelburne, Ont. home due to the effects of nearby turbines, agreed.

“We need a health study done. It’s not a pleasant, benign energy. These are industrial machines,” she said.

Zwig, however, said green energy is safe energy and now’s the time to get in on the ground floor.

“The race is on for your share of what (Premier Dalton) McGuinty has said is an $8-billion green economy. And we can help you get some of that,” he said.

Council is expected to discuss the timing of the report behind closed doors next Monday before bringing it into open session for a vote.