Decision on amendment to Thunder Bay police budget pushed to Jan. 30, council directs administration to find as much as $3 million in total budget cuts.
Jan 16, 2019 3:12 AM By: Matt Vis 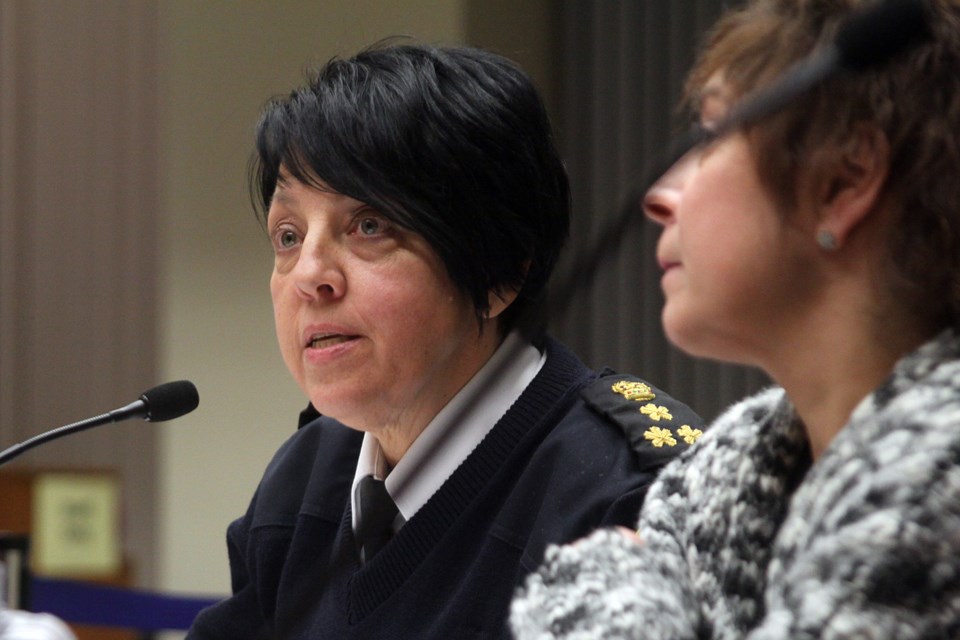 THUNDER BAY – A $1-million ask from the city police force to address recommendations in the Office of the Independent Police Review Director report is putting a stranglehold on the municipal budget process.

Thunder Bay city council met Tuesday night to review the proposed 2019 budget, with the Thunder Bay Police Service’s request for an additional increase setting the tone for the marathon session.

The amendment to the police budget brought forward by police chief Sylvie Hauth, along with police services board administrator Tom Lockwood and board chair Celina Reitberger, includes five new officers to bolster a newly created major cases unit, costs for an external investigator for a peer review process, transferring files to a more widely used records management system, and implementation of a system that includes 130 body-worn cameras for officers, 30 in-car cameras and the required related infrastructure.

Mayor Bill Mauro, who has expressed concern about the costs being pushed on the municipality to address the recommendations, said he spoke to Community Safety and Correctional Services Minister Sylvia Jones earlier Tuesday but did not receive an indication on whether the provincial government would be providing support.

“You don’t have to approve it. Quite frankly I would be more than happy to defer or to not support any of it,” Mauro stressed to councillors.

“Chief (Hauth), I really think we’re all in a difficult spot and I really think it would help us if you would go back, even on the civilian side, and see what it is you can find internally to defray some of these costs because if we don’t get help from the province now we’re not going to get it in the future and the costs are going to continue to grow.”

If council rejects the proposed police budget, it returns to the police services board. If no agreement can be reached between council and the board, the board can submit an appeal to the Ontario Civilian Police Commission.

Coun. Shelby Ch'ng said this was the most she had ever struggled when considering a police budget.

"This is a serious either or proposition. We either pass it or we don't. We don't have any control, we don't have a say," Ch'ng said.

Lockwood, who for the time being has sole voting authority for the board, acknowledged that police are coming forward with a tough request with council facing a difficult choice, adding he would lobby senior levels of government for help if he could.

“If you turn down the ask and play a political game, which you’re entitled to do, who are you affecting? You’re affecting the citizens and they’re not being properly protected,” Lockwood said. “It is not something the board is imposing on anyone. They’re not our recommendations. They’re recommendations by two investigations and what we’re trying to do is implement those recommendations.”

The amendment to the police budget was deferred by council to their budget review process scheduled for Jan. 30.

The impact of the potential police increase sent a ripple effect through the rest of the meeting, which lasted for more than six hours before wrapping up at about 1 a.m. early Wednesday morning.

Setting her sights on another emergency service, Coun. Rebecca Johnson proposed a one per cent reduction to the Thunder Bay Fire Rescue operating budget that would have resulted in a savings of $297,000.

Fire chief John Hay said wages and benefits are responsible for 95.1 per cent of the department’s operating budget.

“Any significant reduction would be a failure in the budget or a reduction in service,” Hay said.

That attempt was unsuccessful with only Johnson, Coun. Cody Fraser and Coun. Brian Hamilton voting in favour.

Mauro then led an effort supported by the majority of council to direct administration to come back with a number of cuts and reductions to lower the levy, with the mayor identifying a preferred target of slashing $3.15 million. That would lower the levy increase to a total of 2.05 per cent.

City manager Norm Gale cautioned council to be prepared to face choices they might not find palatable if they choose to go down that path.

“This is not low hanging fruit. The public will be alarmed and will wish to weigh in,” Gale said.

Council is scheduled to meet again on Thursday to deliberate the budget.