Council in lame-duck status until Dec. 1 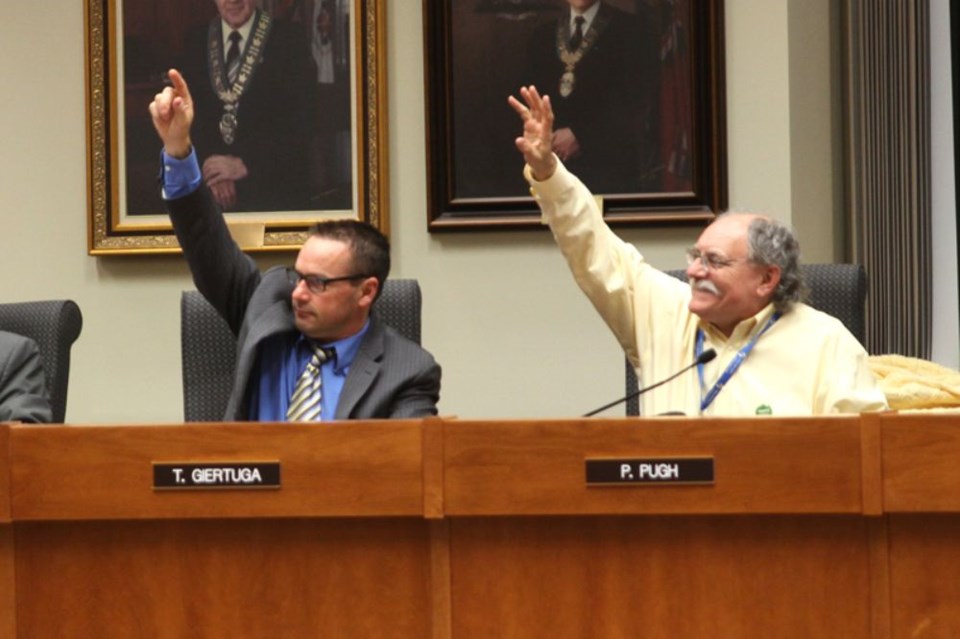 Coun. Trevor Giertuga and Coun. Paul Pugh vote to adjourn a city council meeting. Pugh is one of six councillors who won't be back next term. (Jamie Smith, tbnewswatch.com/FILE)

THUNDER BAY – For the next month, Thunder Bay city council is faced with a lame-duck status.

As a result, it won’t be able to commit any new money to projects, under legislation passed under the Ontario’s Municipal Act.

The lame-duck designation kicks in when it becomes once it’s clear that fewer than three quarters of council will serve on the next term, which was confirmed last Monday when seven new faces were voted into office in last Monday’s municipal election.

Council comprises of 12 councillors and the mayor.

Deputy city clerk Krista Power on Monday confirmed she sent a notice out to current councillors informing them of the change in status.

“We have seven new members of council that have been chosen by the public and who will be taking their oath on Dec. 1,” Power said.

“Between now and Nov. 30, there are some things that council can’t approve.”

According to Power, there are only three components to the restricted council regulations.

First and foremost is the hiring and firing of municipal staff.

It’s a moot point in Thunder Bay, she said.

“That’s actually already been delegated to administration by council many moons ago, so that certainly doesn’t (have an) effect,” Power said.

“The other two are the purchasing of property or the disposition of land and then also any expenditures over and above the budget which have already been approved.”

It means delegations between now and Dec. 1 may not solicit funding and must wait until the Dec. 3 meeting for any chance of approval.

It’s also to avoid having them overturned as soon as the new council is sworn in.