Thunder Bay’s elected officials stood their ground Monday night and left it to the province to decide the fate of a controversial wind turbine farm. Council voted 8-4 to approve an amended agreement between the city and Horizon Wind Inc.
Apr 12, 2011 1:20 AM By: Leith Dunick 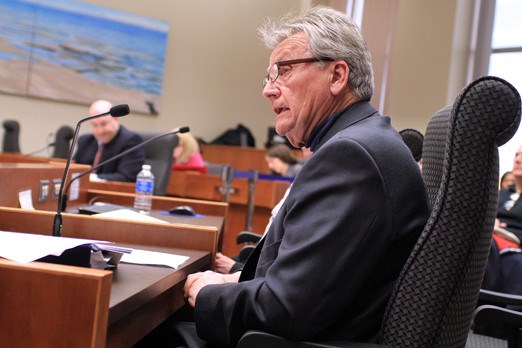 John Beals, an opponent of the Big Thunder Wind Park, said city administration has misled the public and council about the project. (Leith Dunick, tbnewswatch.com)
Thunder Bay’s elected officials stood their ground Monday night and left it to the province to decide the fate of a controversial wind turbine farm.

Council voted 8-4 to approve an amended agreement between the city and Horizon Wind Inc. approving new locations for two turbines on the Nor’Wester mountain range, despite a sea of protestors who greeted their arrival at city hall.

Two other turbines have been taken off the table as a result of the deal.

It was no solace for the opposition group, who have fought the plan for years and have openly threatened civil lawsuits of their own should council approve Horizon’s plan.

“If the city is worried about a lawsuit, there’s probably one coming and it will be substantially larger than the one they just ran away from,” said Mike Payne, co-chairman of the Nor’Wester Mountain Escarpment Protection Committee.

John Beals, one of three people to make a deputation on Monday night, said the citizens have been let down by the city and that many of the 1,000 Neebing Ward residents affected by the decision will be taking a close look at their options and will do everything in their power to stop any road construction along the Loch Lomond Road allowance.

“The city has walked away and stuck their head in the sand,” said Beals, adding residents fear their property could be devalued by as much as 40 per cent.

“Do I blame the council? You know what, I think that they haven’t paid attention to their own policies. They’re the directors of our corporation. They have administration working for them. That administration have misled, not only the population and the citizens of Thunder Bay, they have misled council.”

Neebing Coun. Linda Rydholm, one of four councillors to oppose the plan, said she’s worried the city is now at the mercy of the province and the ministry of the environment’s renewable energy approval process.

She added she doesn’t see a victory of any kind in settling with Horizon, which she feels is at the expense of the city as a whole.

Ontario has already rejected Horizon’s first attempt at an REA, which the company must pass before any construction can begin, according to the deal signed with Thunder Bay. However, it won’t stop them from conducting soil and road bed tests and the removal of a “minimal” number of trees as they seek thumbs up from the province.

McIntyre Coun. Trevor Giertuga, who voted in favour of the agreement, said the fear of having to pay out even a quarter of the $126 million is enough for him to leave it to the province to decide.

“How are we going to increase taxes by 50 per cent? We’re talking about gambling with a potential tax increase. That’s horrendous,” Giertuga said.

The threat of a lawsuit was the reason given by several councillors who approved the deal, including Westfort’s Joe Virdiramo, who reversed his vote of a week ago to side with the pro-agreement camp.

“I will not put the city in jeopardy for a lawsuit,” he said, explaining his decision.

The meeting took a heated turn as councillors had their say leading up to the vote, which came just before midnight on an evening that saw them push reports on tourism and the city-owned golf courses back at least a week.

Mayor Keith Hobbs, who has opposed the plan since taking office, said he’s heard nothing good about the project.

Giertuga took offense when McIntyre Ward was mentioned, pointing out loudly that he fought for the doomed Flying J truck stop, flying in the face of vocal constituents who opposed the plan.

“I will not put my integrity on the line, I will not do it for that reason and I don’t appreciate that,” said Giertuga, lashing out at insinuations by Hobbs that some councillors weren’t up to speed on the Horizon deal.

“I can question how people can be out of town knowing something is coming for ratification and only come back because they’re getting questioned in the media,” he said, a direct stab at Hobbs, who told several media outlets, including tbnewswatch.com, that he was going to miss Monday’s meeting because of BIA meetings in London, Ont.

Instead Hobbs returned home specifically to voice his opinion and cast his vote in the matter – though he plans to turn around Tuesday morning and head back to the London session.

Horizon has scheduled a series of public meetings, part of the REA process, for later this month.