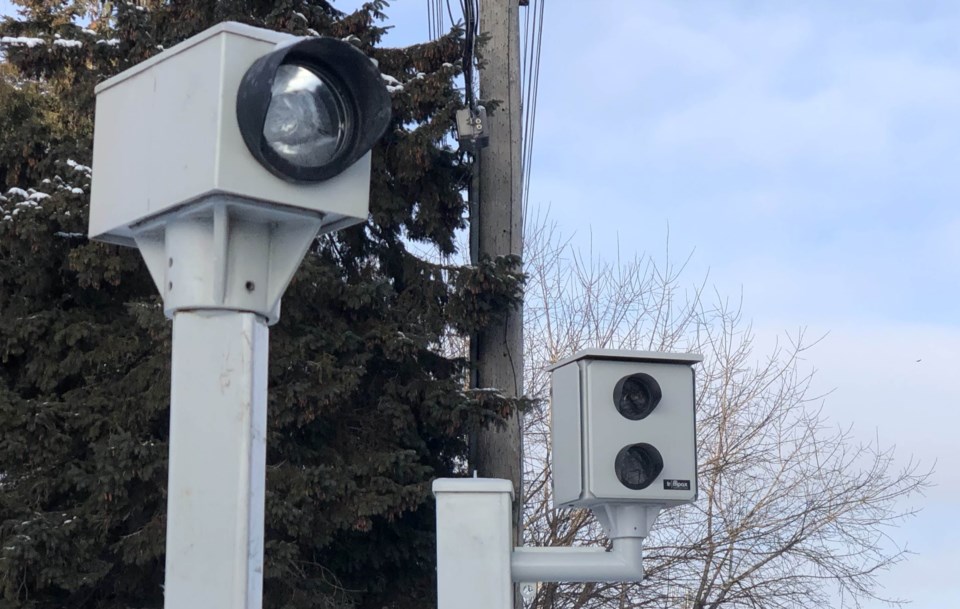 A red light camera in Ottawa, one of 12 municipalities participating in the provincial program. (Chris Kurys/OttawaMatters.com)

A firm majority of city councillors were wary of the five-year, 10-camera commitment the provincial program requires, as well as its estimated $875,000 yearly cost, when the issue was debated Monday night.

Introduced in 1998, the program uses sensors to automatically capture images of drivers who run red lights. Tickets, which run to $325, are processed in Toronto and mailed to the registered owner of the vehicle, with municipalities netting the bulk of the revenue.

Councillors weren’t confident it would be enough to recoup an estimated $4.4 million investment to install and operate the program over five years. Even it if was, said Coun. Mark Bentz, it would be thanks to a huge surge in fines.

“In order for this to be revenue neutral, we’d have to fine our citizens close to $5 million dollars over the next five years,” he said. “I don’t think that’s a good way to finance things. And let’s say it wasn’t revenue neutral, we have to dip into [tax revenues].”

The program would reduce a leading cause of road deaths and serious accidents, said city staff, and was a consistent money-maker for municipalities, at least in the short term.

None of the 12 municipalities participating as of 2020 had failed to break even on the program, said traffic technologist David Binch, who emphasized the potential safety and economic benefits of the program.

Red light violations account for over a quarter of fatal road accidents, despite making up less than one per cent of convictions under the Highway Traffic Act, it noted.

Red light cameras have reduced deadly right angle or "T-bone" collisions by up to 25 per cent in Canadian municipalities.

Severe collisions in cities that joined Ontario's program fell by nearly a third at intersections with the cameras, the city found. The same studies found the cameras also caused a 15 per cent increase in rear-end collisions, which are less dangerous and far less fatal.

The red light camera program would produce revenues of between $2 million and $5.4 million over five years, staff estimated. The cameras tend to become less profitable over time as drivers become familiar with the locations and changed their behaviour.

Council called for additional public consultation on the issue in March. Public input was nearly evenly split, with 50.7 per cent of 473 respondents to a city survey saying they did not approve of the program.

Mayor Bill Mauro joined a number of councillors in arguing the city should improve traffic management before taking a punitive approach.

“I prefer that our focus would be on the synchronization of the light system instead of on red light cameras - I think it certainly would result in far better behaviour," he said.

“Let’s get our traffic system functioning properly," Bentz agreed. “It never ceases to amaze me when I try to cross the city how many times I have to stop and how short cycling our lights are.

“It’s so frustrating for drivers, and you wonder why some people are starting to ignore red lights – it’s because we don’t have a functioning system.”

Coun. Kristen Oliver agreed the program's cost was "daunting," but countered that tickets were effective in changing behaviour.

"Laws are not a buffet," she said. "You don't pick and choose which ones you want to follow, they're there for a reason."

Coun. Brian McKinnon said replacing lights with roundabouts, as the city is now doing for the first time at Edward and Redwood, was another proven strategy to reduce fatal collisions.

The city is making investments in its traffic light system with the goal of synchronizing lights on major streets in the coming years.

Council voted 8 to 3 against the recommendation to join the red light camera program.

The margin would have been larger if Coun. Rebecca Johnson hadn’t dropped out of the virtual meeting due to technical issues, after firmly declaring her intention to vote against.