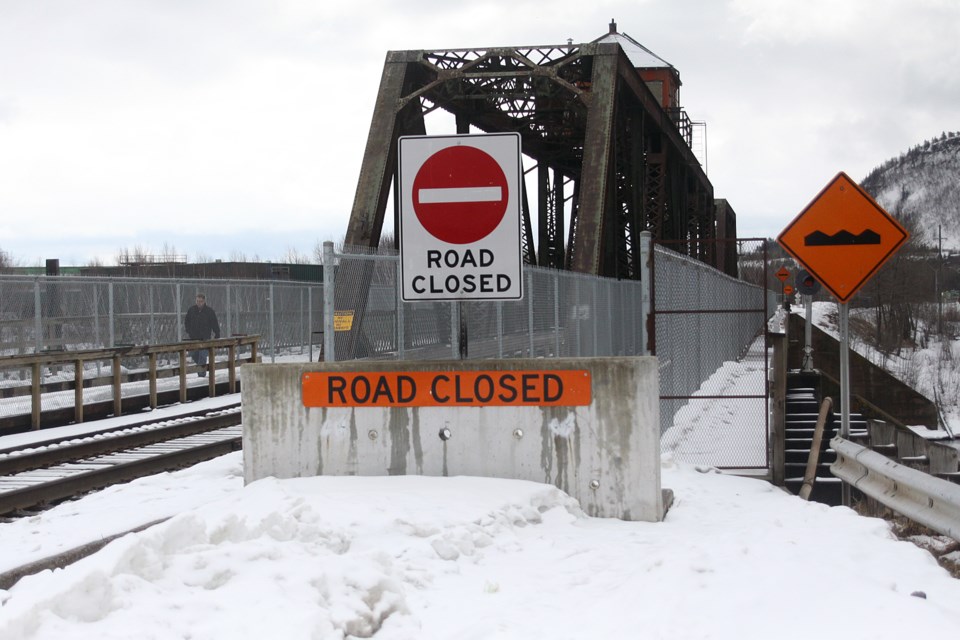 The James Street Swing Bridge has been closed to vehicular traffic since Oct. 29, 2013. (Matt Vis, tbnewswatch.com)

Justice Janet Simmons on Sunday ruled the company did not put forth a strong enough argument to grant the stay of a June 2018 ruling ordering the company to re-open the bridge and follow the terms of a 1906 agreement that states they must maintain the Kaministiquia River span in perpetuity.

CN claimed the repairs would cost between $4 million and $6 million. The bridge closed to vehicular traffic in October 2013 after a fire, and reopened to train traffic within days.

Justice Simmons, in her judgment, said a party seeking a stay must show there is a serious issue to be adjudicated on appeal and that it will suffer irreparable harm if the stay is not granted.

Simmons said while she’s not convinced CN won’t suffer irreparable harm and wouldn’t be able to recoup financial losses should their appeal of the June decision to the Supreme Court of Canada be successful, she weighed that against how long it took the company to file for a leave application, more than two months.

“Although I cannot characterize such a delay as unreasonable in the abstract, in my view it does not reflect the conduct of a litigant concerned about irreparable harm and for whom time is of the essence,” Simmons writes.

“To that extent, I consider that CN has contributed to the situation it is in.”

Simmons added she’s also not convinced the delay would be limited to two months.

“Based on evidence that the reconstruction CN proposes could take four to eight months and the uncontested fact that winter weather can impact construction, I cannot be satisfied that granting the stay would not have the effect of delaying the reopening of the bridge until 2020 if leave is not granted. As CN is seeking a stay, it had the onus of demonstrating the extent to which granting the stay would delay the reopening of the bridge,” Simmons said.

The justice said she also weighed the financial impacts to the City of Thunder Bay and Fort William First Nation against the costs to CN.

"In my view, CN has not identified a serious issue to be adjudicated that meets the criteria for granting leave under Section 40 of the Supreme Court Act. I conclude it is not reasonably arguable that CN will obtain leave.”

Simmons concludes by saying if the two sides are unable to agree on costs, the City of Thunder Bay and Fort William First Nation may put forth brief submissions, with CN given 10 days to respond.

Outgoing Mayor Keith Hobbs was pleased with the decision.

“The court is clear that CN must fix its bridge now. Over the past four years the city has sought to have CN Railway honour its commitments under the 1906 agreement to repair and reopen its bridge. Council remains resolved in its expectations, which have been confirmed by the court again," Hobbs said in a statement released to media on Monday morning.

"The Court of Appeal ruled in favour of the city in June of 2018 and ordered CN to reopen its bridge to all traffic including cars and trucks. CN is fully responsible for its bridge, which is an important connection between Thunder Bay and Fort William First Nation. CN must obey the court order and act now. CN has run out of reasons to continue to delay.”