City disappointed at ruling brought down by Superior Court of Ontario.
Jun 14, 2017 1:24 PM By: Matt Vis 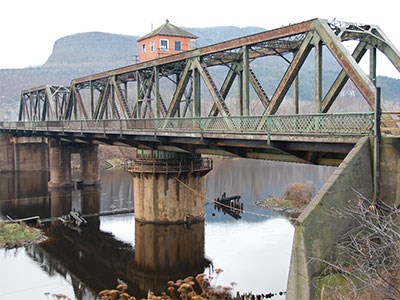 The city's legal case to order CN to reopen the James Street Swing Bridge has been dismissed by Superior Court Justice Patrick Smith.

THUNDER BAY – A judge has ruled the Canadian National Railway is not responsible for reopening the James Street Swing Bridge to vehicular traffic, determining the original 1906 agreement does not clearly order the company to make the repairs and upgrades required to bring the structure up to current code.

Superor Court Justice Patrick Smith ruled against the city of Thunder Bay in its legal application attempting to force CN to reopen the century-old span connecting the city to Fort William First Nation across the Kaministiquia River.

In his reasons for dismissing the city’s case, the judge said the legal responsibility was on the city to define exactly what CN would have to do to make the bridge “safe for motorized traffic.”

“Without a specific and detailed proposal from the city – one that has been tested and approved as structurally safe for public traffic, this court is left without reliable evidence upon which to formulate the orders that the city is seeking,” Smith wrote.

The bridge has been closed to vehicular traffic since a fire broke out on the bridge on the evening of Oct. 29, 2013, though trains resumed crossing later that week.

An agreement between the Grand Trunk Pacific Railway – the owner of the bridge prior to CN – and the town of Fort William – which later amalgamated into Thunder Bay – signed in 1906 ordered the town to provide $50,000 towards the construction of the bridge with the company agreeing to maintain the structure “in perpetuity” and to provide sufficient space to accommodate street car, vehicular traffic and separate passage for foot passengers.

The city argued the agreement compelled CN to open the bridge to provide vehicular access and that repairs could be made to the structure without changing the configuration of the bridge.

Lawyers for the company countered the structure is made of up two distinct bridges – a roadway span and a rail crossing – and that the bridge can’t be made compliant with modern safety standards and regulations without a total rebuild.

“I find that by the words used in the agreement, the subsequent conduct of the parties and the context in which the agreement was signed, it was the intention of the parties that the CN would maintain the bridge for the type of bridge traffic that existed at the time, namely streetcar and horse and cart traffic,” Smith wrote.

“Use of motor vehicle and truck traffic was just beginning to take place with very few if any cars or trucks owned in the towns of Fort William and Port Arthur.”

Prior to the closure, the bridge had a posted weight limit of 15 tonnes and a speed limit of 20 kilometres per hour. The most recent annual daily traffic estimate was nearly 8,900 motor vehicles per day.

An engineering assessment conducted on behalf of CN following the blaze found the fire damage was minor but there were several safety deficiencies on the roadway and pedestrian portions, such as the “narrow roadway lane and sidewalk widths, absence of traffic barriers, inadequate pedestrian and cyclist handrail.” It also determined it was possible for vehicles to climb over the curb and off the bridge into the river. The width of the roadway was measured at 2.85 metres, less than the standard of three metres.

“We are disappointed with the decision, and are considering our options going forward,” city manager Norm Gale said in a statement. “A full report will be brought to city council soon. We will not be making any further comment at this time.”