Dr. Janet DeMille said she feels like it's only a matter of time before Northern Ontario sees another surge in COVID-19 cases similar to what is happening in Southern Ontario.
Apr 7, 2021 5:01 PM By: Doug Diaczuk 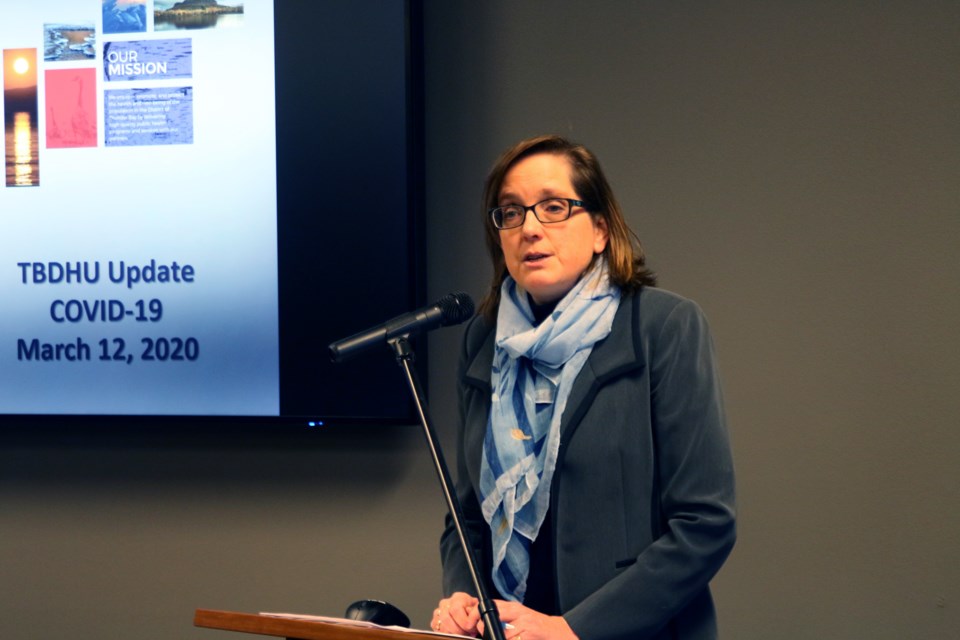 THUNDER BAY - The number of COVID-19 cases continues to surge in parts of Ontario and Dr. Janet DeMille, medical officer of health with the Thunder Bay District Health Unit warns it could only be a matter of time before that starts to happen here.

“I think it’s hard to predict what could happen,” she said. “We know what happens in the rest of the province does impact us and the rest of the country can impact us. When I see what’s happening in the Toronto area or other areas of the country, I feel like it’s just a matter of time before we can see that here.”

The Thunder Bay District has seen a decline in new daily COVID-19 cases in the past several days, with 15 reported on Wednesday and the active case number dropping again to now sit at 148.

In Ontario, there were 3,215 new cases reported on Wednesday, as parts of Southern Ontario struggle with variants of concern spreading and resulting in more hospitalizations and intensive care unit admissions.

“I am very concerned that we could see an increase in cases,” DeMille said. “However, in different parts of the pandemic, we have seen the north do better than the rest of the province. We do have the benefit of our remoteness and our geography that can help us.”

But that remoteness is only beneficial if people do not travel outside of the region for non-essential reasons, DeMille added, because that can easily bring more cases, particularly variants of concern.

“This is not the time to be travelling,” she said. “The virus will come to our area by people bringing it here. That is one of the big ways the variants can get here.”

According to DeMIlle, the recent decline in daily cases in the Thunder Bay District is due to a number of reasons, including being under grey lockdown, as well as some significant outbreaks resolving and associated cases declining.

“I would encourage people to make sure if they have any symptoms to go and get tested,” DeMille said. “We have seen a drop in testing as well. We have to keep up in monitoring what is happening in our area.”

Vaccinations continue to move forward in the district, with individuals aged 60 and over now eligible to book an appointment as part of phase two of the province’s vaccine rollout strategy.

According to DeMille, in the last two weeks, between 5,000 and 6,000 doses have been administered per week.

“I think we are anticipating around 6,000 doses being administered this week. It is very much matching what we are getting in,” she said. “We are certainly capable of delivering more vaccine than we are getting.”

The Thunder Bay District Health Unit receives between 3,000 and 4,000 doses of the Pfizer vaccine per week, as well as additional doses of Moderna, though the numbers vary.

Three pharmacies in the area are also expecting to begin administering the AstraZeneca vaccine in the city to those over the age of 55.

There have been calls across the province to shift priorities for the COVID-19 vaccine to include essential workers, including teachers. Essential workers are identified as part of the province’s phase two rollout, which is expected to take place between April and June.

DeMille said if provincial policy’s change to start vaccinating essential workers across the province, the health unit and its partners is willing to implement those changes.

“There are so many people I would really like to immunize right now to offer that, but we just don’t have the supply to do that, so there still needs to be prioritization done,” she said.

The provincial government also announced on Tuesday that designated COVID-19 hotspot areas will begin vaccinating those aged 50 and over.

Earlier this year, when the city’s daily case numbers were surging, there were calls to designate the city as a COVID-19 hotspot, in part due to additional allocation of vaccines.

DeMille said when the numbers were increasing, more doses of vaccine were allocated to the district, including additional Moderna vaccines.

“I’m satisfied with the ministry’s response in terms of vaccination provided to our area when we were having those numbers,” she said. “I am hoping we can keep our numbers low here and continue to drive forward with our immunization.”