THUNDER BAY – One of the next generation of Great Lakes cargo ships made its debut stop in the city.
Apr 13, 2015 5:36 PM By: TbNewsWatch.com Staff 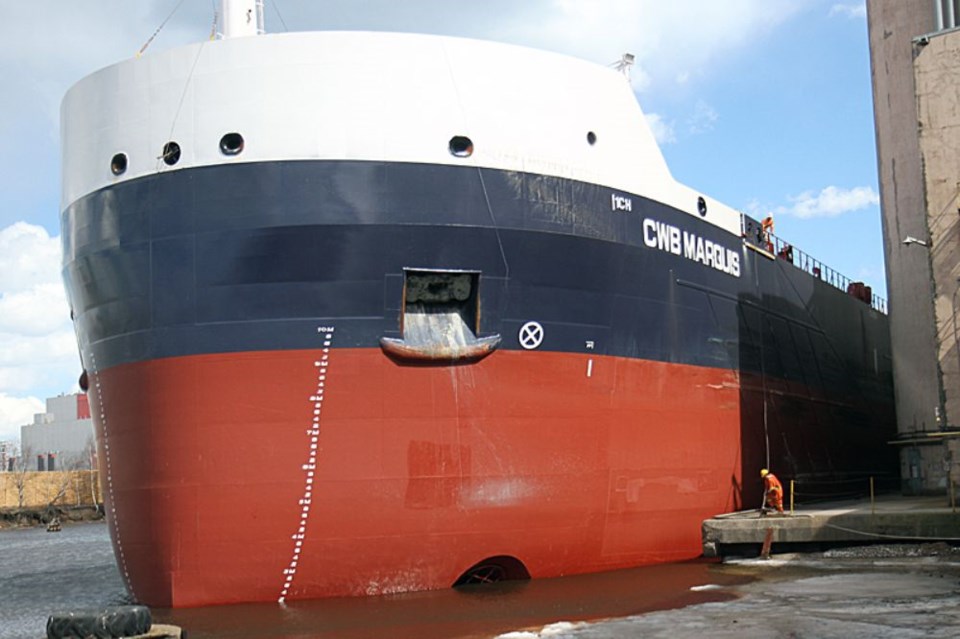 THUNDER BAY – One of the next generation of Great Lakes cargo ships made its debut stop in the city.

The CWB Marquis, a $40 million massive laker, arrived at the Mission Terminal on Monday morning to receive its first load of grain from a Thunder Bay elevator.

Capt. Seann O’Donoghue said the 225-metre long ship can transport 30,000 metric tonnes of cargo, which is about 25 per cent more than the older class of lakers. It also has far more modern amenities.

Local media were provided with a tour of the ship in the afternoon as crews prepared to load grain to ship to ports in Quebec.

The ship will haul prairie wheat from Thunder Bay east, then turning around to transport Labrador iron ore west to Hamilton before heading back up to the Lakehead.

“The old lakers are pretty primitive by today’s standards. This is a whole new world for sailors on the Great Lakes,” Heney said.

“This ship was built specifically to go to Thunder Bay. This is a Wheat Board elevator here in Thunder Bay and they also have one in Trois-Rivieres, Que. This ship will mostly run between those two elevators.”

He said the Marquis is one of a number of new ships that will be travelling across the Great Lakes in the coming years.

Changes making grain companies responsible for shipping their product, rather than the Canadian Wheat Board, created questions about the sustainability of the local grain shipping industry but it seems to have a bright future.

“It’s a major investment in the future of the seaway,” Heney said.

“There was a lot of concern when that monopoly broke up there would be issues for Thunder Bay but so far it’s turning out very positive for us. We’re seeing a lot more throughput ocean ships and last year we had the best year in 16 years.”

The Marquis had a little bit of extra excitement before arriving at the elevator.

O’Donoghue and his crews discovered early in the morning a massive ice sheet from the Welcome Islands had come loose and was heading right for their ship.

“Once that wind catches the ice it moves it and there’s quite a lot of horsepower to it,” he said. “It was going to push the ship the wrong way so we had to stop and break the ice before we could come in this morning.”

The ship has only been in Canadian waters since the beginning of the year and is expected to have a working lifespan of 40 years.