WINNIPEG -- By the time members of Deer Lake First Nation reached Winnipeg on foot Thursday, they realized their cause to bring a dialysis machine in their community had only begun to gain momentum.
Aug 22, 2015 12:07 PM By: Jon Thompson 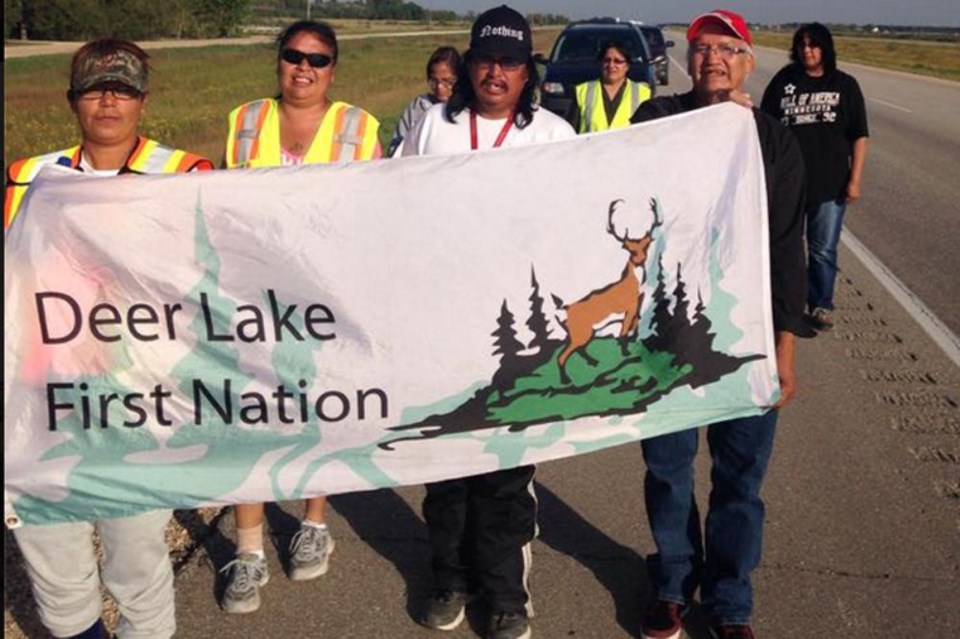 Walkers from Deer Lake First Nation reach Winnipeg on Thursday. Having raised only $1,000 of the estimated $30,000 needed to bring a dialysis machine to their community, they've decided to walk back to Thunder Bay. (Photo Supplied)

WINNIPEG -- By the time members of Deer Lake First Nation reached Winnipeg on foot Thursday, they realized their cause to bring a dialysis machine in their community had only begun to gain momentum.

On Saturday, they announced they're walking back to Thunder Bay.

Departing from the Lakehead on Aug. 10, the walk to bring awareness to the effects of remote health care on their community raised only $1,000 of the estimated $30,000 needed to bring a dialysis machine to Deer Lake, located 150 kilometres north of Red Lake.

"Some people we know haven't seen their home in more than 15 years. We thought, 'how would I feel if I got taken out of my community and couldn't do the things I normally do, traditionally?' Can't go fishing, can't go hunting, can't go camping, can't enjoy the land.

"If a machine was there, at least they could come home and enoy their home, to go on a boat, to catch a fish in their own lakes."

Meekis said the growing attention over the course of the walk is beginning to show results in donations and although the four-person walking team never intended to walk back to Thunder Bay once they reached Winnipeg, they've decided to walk while the iron is hot.

"We're not oging to go door-to-door, putting people in a position where tehy have to answer you but it should come from how each person feels," he said.

"It's not about us. It's about trying to do something for our community, for our people who can't come home."

Deer Lake Chief Roy Dale Meekis traveled to Winnipeg to meet the walkers when they arrived. He praised the walkers for their efforts to increase the First Nation's health care capacity.

"High levels of diabetes and the lack of local access to treatment has caused a desperate situation for our community," the chief said.

"Our members who suffer from diabetes are forced to leave home for treatment and many never return."