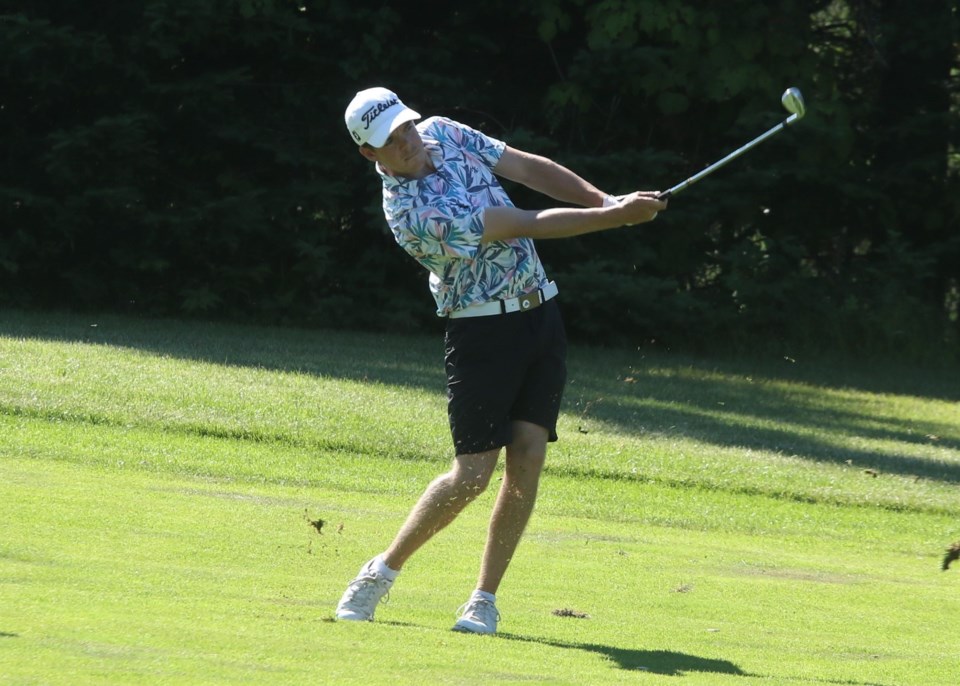 THUNDER BAY – It was going to take a low score to beat Evan DeGrazia on Sunday.

It just wasn't out there.

The 25-year-old started the final round of the AON Distritct Open with a six-shot lead, fired a 3-under 33 on the front nine and, despite a pair of double bogeys down the stretch, cruised to an eight shot win at Whitewater Golf Club.

DeGrazia finished the day with a 1-over 73, following up a spectacular 7-under 65 on Saturday at Fort William Country Club. It was his second Thunder Bay District Golf Association title this season for the future Mackenzie Tour-PGA Tour Canada professional.

Two weeks ago he and his father John DeGrazia combined to capture the Mallon's Play It Again Sports Better Ball Tournament with a five-shot triumph.

“It's awesome. Any time you come out with a victory it's good. To go back-to-back weekends, I guess you'd say, is fun,” DeGrazia said.

Undeniably the best golfer in Thunder Bay, taking a six-shot lead into the final round took much of the pressure off, freeing DeGrazia to go out and play his game.

“With a lead like that, you almost have to create your own battle within yourself to try to go lower, because if you just take the foot off the gas, you never know. The guys could start playing good and then one bad hole the next thing you know it's three shots and from there it's tight,” DeGrazia said.

“I kept my foot down, played really well on the front nine. I got a little fatigued on the back, but it was OK.”

DeGrazia said he hit the ball extremely well, one of the first times he's gotten off to such a great start at Whitewater, a tricky club on the best of days, the former home of the Staal Foundation Open – a tournament DeGrazia played five times, but never made the cut in.

He birdied the 362-yard second hole, then rolled in a nine-foot eagle putt on the seventh to extend his lead.

He was rolling along until the 14th, when he tried to reach the green off the tee on the tempting 317-yard hole, only to find the pond.

DeGrazia couldn't get up and down and took a double-bogey six.

Two holes later, after maneuvering a patch of trees to find the back of the green, DeGrazia uncharacteristically four-putted – including three from within five feet. But he righted his game on 17 with a nine-foot birdie, not that it mattered at that point.

“I'll just probably chalk that up to fatigue. It was a hot day, a long day and a long weekend. What are you going to do?

Gardner, the defending champion, opened with a 2-over 74 on Saturday and shot the low round of the day on Sunday, with an even-par 72 to take second with a 146 total. Caland, who has two District Open titles on his resume, was three shots further back, his 3-over 75 giving him a two-day total of 149, tied with Jeff Hunter for third. Peter Lovis and Jeremy Kirk finished with 6-over 150 totals to grab shares of fourth, rounding out the top five.

Casey Niemi, who shot 1-under 71 on Saturday to earn a spot in the final group, couldn't maintain the comfort of his home course on Sunday, scoring an 11-over 82 to fall out of contention.