Designated Truck Route back in limbo as council rejects bylaw 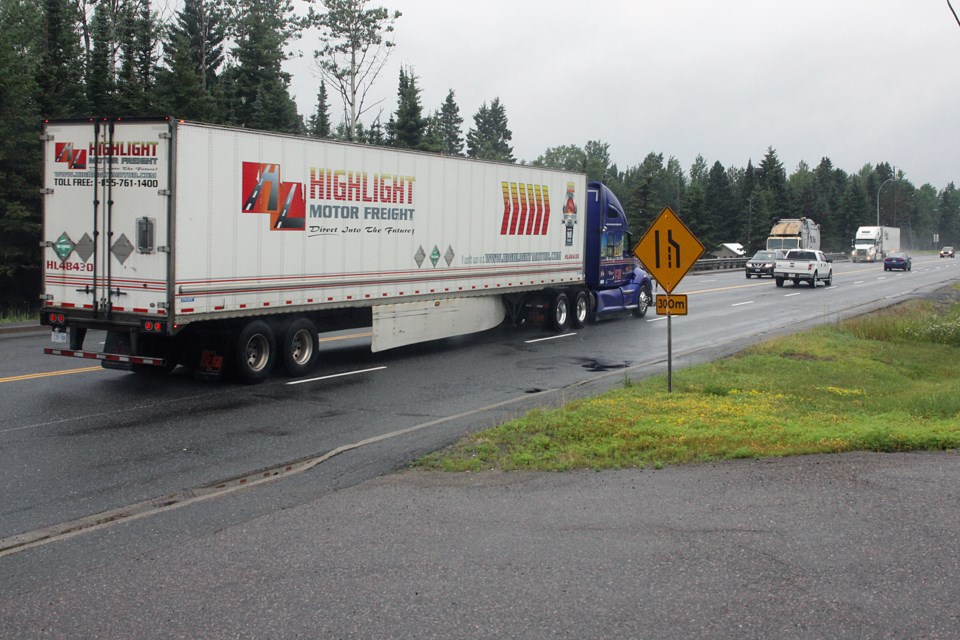 If enacted, the Designated Truck Route (DTR) would force heavy trucks off Dawson and Arthur and onto Highway 11/17. (File photo)

THUNDER BAY – A gridlocked city council struggled to identify a way forward on the controversial Designated Truck Route (DTR) after rejecting a bylaw to enact the route Monday on a narrow 7-6 vote.

It’s the latest twist in a years-long push to implement the DTR that has encountered seemingly endless political, legal, and procedural snags. Councillors’ mounting frustration with their failure to resolve the issue was evident Monday, with accusations of bad faith flying, one councillor apologizing, and another saying he was personally embarrassed by the messy process.

The route, which would force heavy trucks off Dawson Road and Arthur Street and onto Highway 11/17, now appears stuck in limbo, with council unable to enact or definitively reject the idea.

Council passed the DTR on a 7-6 vote in January of 2019, but on Monday voted for the second time against a bylaw to put the route into force.

Because council approved the DTR in theory, city manager Norm Gale told councillors that city administration is bound to continue bringing back proposed bylaws to enact it until one is passed.

Coun. Brian Hamilton, whose change of heart against the DTR last summer flipped the balance against it on the bylaw votes, declared his intention to file a notice of motion to rescind the original DTR decision. If passed, that would put the matter to rest for good and leave the status quo in place.

Hamilton will be in a position to file the notice at council’s next meeting July 20, with the vote to rescind coming one week later. However, the motion would require a two-thirds majority of nine councillors – something several councillors said Monday would be impossible, given the narrow split on the issue.

Coun. Trevor Giertuga, who has passionately championed the DTR, pushed councillors voting against the bylaw to explain themselves.

“I would like to hear from council members who might vote against it as to what they’d like to see changed with the bylaw, not whether or not they’re against the DTR – that’s been passed and duly ratified by city council,” he said. “I just want to hear from them, otherwise I can only assume they’re trying to undermine the will of council.”

It’s not the first time Giertuga has used strong language to condemn those voting against the bylaw. He previously accused Mayor Bill Mauro of violating council’s code of conduct by pledging to vote against any DTR bylaw.

“This is something we’ve been sitting on for over a year, we’re looking pretty silly in the community, and we’ll have to see if this doesn’t pass where it leaves us legally,” he said.

City manager Norm Gale also wanted to hear rationale from those voting down the DTR, which he said would help administration make the right changes before bringing it back for reconsideration.

Several councillors who opposed the bylaw rejected the request, saying councillors are free to vote as they see fit.

“Democracy is messy,” said Coun. Mark Bentz. “This is a split decision, and this is what happens in split decisions. Am I going to implement a bylaw for something I don’t want? No. That doesn’t mean I’m undermining council’s wishes – I’m following my heart [as] an elected representative. Noone should be twisting anyone’s arm to vote any way.”

“I take umbrage with some people attacking others for the stand we’ve taken,” McKinnon said. “I don’t appreciate those kinds of accusations. I’m not going to be calling people names. I’m a little upset with that, and I hope that ends right now.”

Councillors Aiello, Ch’ng, Foulds, Fraser, Giertuga, and Ruberto ultimately voted in favour of the bylaw, with all others voting against.

Coun. Brian Hamilton began the debate by apologizing to his colleagues and the public for his part in the delay on the matter.

“It was my vote that ended up in this procedural quandary, and to you and the public who’s had to deal with this issue, I truly apologize,” he said. “We look like a bunch of idiots, and I take the blame for it.”

The McKellar ward councillor said he had wrestled with the decision and saw it as a “net neutral,” with safety concerns around increased traffic on Highway 11/17 balanced by objections to heavy transport traffic from those in residential areas along Arthur and Dawson.

“I cannot confidently vote for this bylaw,” he said. “It’s like a net neutral, I see the arguments on both sides. In the end, I can’t confidently put my hand up and sleep at night knowing I’m just going to wing it. Every other decision I’ve made in these chambers I’ve made confidently – this decision has been an issue for me.”

Mauro and several other councillors said while it was a frustrating situation, there was no need for Hamilton to apologize.

Coun. Cody Fraser put forward a successful motion to seek new legal advice on the matter, with the city’s internal legal counsel set to advise council on the implications of failing to enact the DTR. He suggested the city might need to adjust its procedural bylaws to ensure the same situation couldn’t happen again.

“We need to solve this problem, it can’t just keep coming forward,” he said. “It’s frankly personally embarrassing. This is a novel legal issue. I want us to be able to rectify this, and I’d really like the lawyers to tell us how to do that.”